An Eco guide to happiness 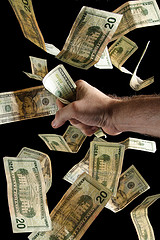 Enviro-films get attacked for all sorts of odd reasons -- and the 20-minute eco-film The Story of Stuff, which points out that buying a whole lot of crap will cost you a lot of money and not do the environment any favors, is no exception. A parent in Missoula County, Montana, complained about the video's “anti-capitalist” message -- prompting the school board to decide that The Story of Stuff “violated its standards on bias.”

Of course, that anti-capitalist message may be just what we need to make us happier. Dan Gilbert, psychology professor at Harvard and author of Stumbling on Happiness, points out in a recent TED talk that we've been conditioned by our capitalist society to think our happiness means less when it's not accompanied by stuff we want (via No Impact Man):

Watch the full 20-min vid for a fascinating look at your own capacity to create your own happiness:

Incidentally, Dan points out that we're best able to manufacture our own happiness when we're left with no choices (i.e. are stuck with the pair of jeans you bought due to a no returns policy). That's what Barry Schwartz, author of The Paradox of Choice, based his TED talk on a few years back. Barry too floated a rather anti-capitalist idea: Embracing income redistribution — which’d give the poorest people more choice, while limiting the choices of the richest people a bit — thereby leaving both the poor AND the rich better off in terms of personal satisfaction, happiness, etc.

Last but not least: Here's the Story of Stuff:

Have a happy anti-capitalist day --

Related topics: Education
An Eco guide to happiness
Can going green make you happy? Here's why you should make a firm decision to buy less stuff.