PYM would be a pregnant young mother -- one willing to big up the benefits of a chemical suspected of harming babies' brains. 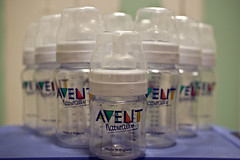 What do you do when your product is considered toxic to babies’ health? Get a spokesperson, of course — preferably a pregnant young mother you can pay to big up the benefits of your product.

That’s the strategy of the BPA Joint Trade Association members, according to a memo about the group’s meeting. As MNN food blogger Jen Savadge wrote about a couple days ago, the Washington Post reported on an industry meeting to improve the public image of Bispheonol A (BPA). Now, ScienceBlogs’ Effect Measure has posted the meeting memo online (via boing boing).

Why a meeting about BPA? Bisphenol A (BPA) hasn’t been getting much love lately. The endocrine disruptor’s suspected to permanently alter babies’ brains and reproductive systems and cause cancer and other health problems — which has environmental and consumer rights groups fighting to get stuff out of baby bottles, canned foods, and other food and beverage containers.

Big companies like Toys R Us and Wal-Mart, major baby bottle manufacturers, and the state of Minnesota have all already agreed to make baby bottles BPA-free — and other states like California have anti-BPA legislation in the pipeline. So the BPA industry’s been hard at work trying to counter BPA’s bad rep, with the American Chemisty Council going so far as mailing warning flyers about how “your favorite products may soon disappear” from grocery shelves.

It seems that tactic didn’t do the job — and that neither mainstream media outreach (expensive, and ignoring “their side”) nor social media outreach (unlikely to “work for positive BPA outreach) are working. Thus, the BPA industry came up with some new ideas, according to the memo:

Attendees suggested using fear tactics (e.g. “Do you want to have access to baby food anymore?”) as well as giving control back to consumers (e.g. you have a choice between the more expensive product that is frozen or fresh or foods packaged in cans) as ways to dissuade people from choosing BPA-free packaging. …

The committee doubts obtaining a scientific spokesperson is attainable. Their “holy grail” spokesperson would be a “pregnant young mother who would be willing to speak around the country about the benefits of BPA…."

Eventually, the committee concluded before deciding on the tactics to spread their messages, they need to develop the messages. The committees plan to fund a joint survey and message testing — what new messages they need to sell — before implementing a website and creating materials. Another task group will be implemented to finalize how to develop messages and aggressively use electronic media to deliver those messages.

I can attest that the American Chemistry Council is already aggressively using electronic media, for both BPA and other questionable chemicals and products. Just today, I got an email from the council about the recent study linking autism with PVC (vinyl) flooring. “We want to be clear that no studies have demonstrated a causal link between phthalates and autism,” said the email, basically pointing out that correlation is not necessarily causation.

Of course, the researchers who found the correlation have already emphasized the need for further study — but ACC’s efforts here point to a continued desire to cast doubt on the PVC issue — just as global warming deniers have quite effectively done in the past, and still continue to do now. Of course, such tactics become more difficult and ineffective — and somewhat laughable –  in the face of mounting scientific evidence against their claims….

Related topics: BPA, Toxins & Chemicals
BPA industry seeks PYM
PYM would be a pregnant young mother -- one willing to big up the benefits of a chemical suspected of harming babies' brains.