Celery tops the 'Dirty Dozen' list of conventional produce that is most contaminated with pesticide residues.

Celery is well-liked by the health-conscious because it’s low in calories — but the stalky veggie is not low in another health concern: pesticides. Eat conventionally farmed celery, and you’re eating the veggie found to have the most pesticide residue, according to green nonprofit Environmental Working Group’s latest Shopper’s Guide to Pesticides.

The updated guide hasn’t been officially released yet, but EWG sent out a sneak preview (PDF, or see below) for its members. In this new version, celery displaces the peach as the dirtiest piece of produce — though both were already on the “Dirty Dozen” list of most tainted produce last time around too. New inductees into the list are blueberries, spinach and potatoes — which replaced lettuce, carrots and pears. 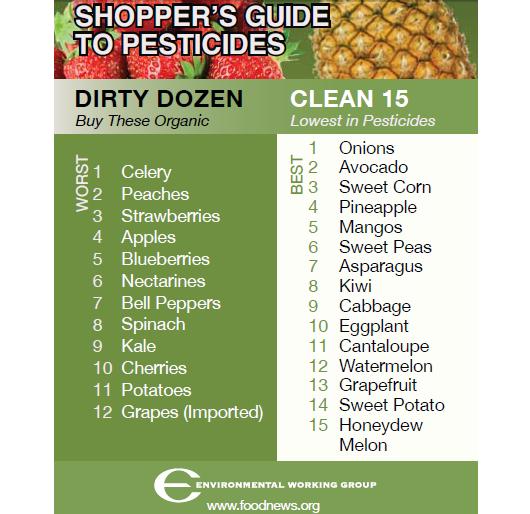 EWG’s Shopper’s Guide’s intended to help 5-a-day eaters make the healthiest buying choices — especially when on a budget. If you can’t afford to buy all organic produce, simply start by making sure to opt for organic versions of the “Dirty Dozen” products to avoid the most pesticide residue for your buck.

Or if you can’t afford to buy organic at all, take the advice Dr. Andrew Weil gives in the video he made for the EWG’s Guide. Dr. Weil, who often speaks about the danger of chemical pesticides, says about the Dirty Dozen list: “If I can’t get organic versions of those, I’m not gonna eat them.” Simply opt to buy the produce on the “Clean 15″ list instead, which have the least pesticide residue.