Want to eat yummy, healthy, eco-friendly foods on a budget? One creative foodie shows you how easy it is. 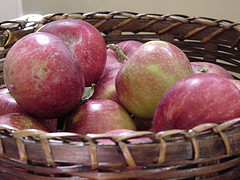 Recently, TIME magazine put together a cover story on how the economic crisis is affecting the average American, profiling a number of people ranging from a sports CEO to a laid-off GM employee. Reading through the stories, I saw an odd trend — people are cutting back and spending a lot less — yet organic foods are flying off the shelves — with an organic farmer saying his sales are up 500%!

The juxtaposition’s surprising because a lot of people still think of organic food as a luxury for the Whole Foods crowd — yet the fact that people are seeking out organic food even during tough economic times shows this isn’t necessarily true.

In fact, in a Salon article, Siobhan Phillips proves that eating sustainably and ethically can be done on a budget — even on a seriously limited budget. She and her husband embarked on an experiment to eat only SOLE foods — sustainable, organic, local or ethical foods — “on the government-defined, food-stamp minimum: $248 for two people in our hometown of New Haven, Conn.” Even more courageously, the two started this experiment with bare cupboards!

No, Siobhan didn’t go on an all-vegetarian diet — though she did have to pass on the grass-fed steak. “Instead, I bought a small free-range chicken for about $9 and a scant pound of local ground beef for about $6, knowing that this, along with some sustainable canned fish, was our allotment of animal flesh for four weeks.” That meant she really, really had to stretch the chicken, not only using up every piece of meat but also saving the fat and boiling the bones for broth.

But by buying dry beans in bulk, baking her own basic bread, and discovering thrifty cookbooks and international cuisine, Siobhan got to have her Chinese fried rice and Italian risotto and spicy biryani and eat them too. She says it didn’t take much more time than usual — and she didn’t have to give up her morning cup of organic fair trade coffee or fair trade cocoa desserts either.

Siobhan says her method won’t work for everyone: “I relied on the sort of reasonably flexible schedule that is a luxury in far too many households, and I started with some basic cooking knowledge.” But they sure sound like they’d work for me — and many other MNN readers. Read her article for more details on her frugal and tasty ethical eating — which she says she plans to stick to — save for the occasional pepperoni pizza.

Related topics: Economics, Organic Cooking, Organic Foods
Eat sustainably on a food stamp budget
Want to eat yummy, healthy, eco-friendly foods on a budget? One creative foodie shows you how easy it is.