Throw a virtual chocolate egg at politicians — and egg them on to keep fair trade on the G20 agenda.

Chocoholics rarely know that the bars and snacks they eat could have been made through child trafficking and abusive labor. Now, at least in the U.K., more ethically-produced fair trade chocolate’ll be a lot easier to find, since Cadbury’s announced it’ll make Cadbury Dairy Milk bars with fair trade chocolate. (via Change) 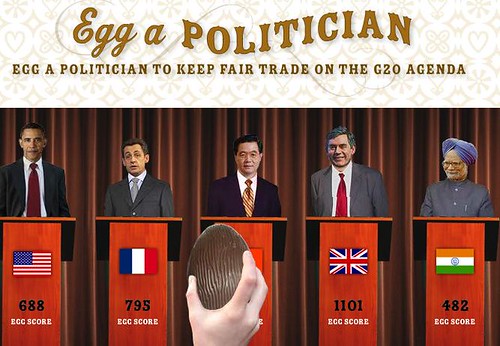 Cadbury’s in the U.K. is like Hershey’s in the U.S. If only Hershey’s Milk Chocolate bars were also going fair trade! Divine Chocolate, a fair trade choco company co-owned by cocoa farmers, wants you to help make this happen — by throwing virtual choco eggs at avatars of politicians.

Egg a Politician lets you aim your egg at one of the five leaders — Barack Obama, Nicolas Sarkozy, Gordon Brown, Manmohan Singh or Wen Jiabao — attending the G20 summit, when finance ministers and central bank governors of 19 countries and the European Union will meet to discuss “key issues related to global economic stability.”

Well-aimed e-eggs will be swallowed up by the e-politicians (Obama says “Mmmm. Yes we can”). And post throw, you can send an email to the politicians asking them to keep fair trade on the G20 agenda.

Related topics: Organic Foods
Egg a politician
Throw a virtual chocolate egg at politicians — and egg them on to keep fair trade on the G20 agenda.