Today, “natural” foods seem to be defined primarily by lack: Not by what’s in the product, but what’s not.

Zizek famously pointed to caffeine-free diet coke as “nothing in the guise of something” — a drink that provides neither nutritional value nor good taste — nor quenches thirst, for that matter. And while Coke may have gotten “it” first, drinking and eating nothingness seems to have become the new health craze.

Gone are the days when companies promoted its healthy ingredients — or new “scientific” additives. Today, “healthy” and “natural” foods seem to be defined primarily by lack: Not by what’s in the product, but what’s not.

Where I saw this trend toward nothingness most clearly: At Natural Products Expo West — an annual event showcases “the newest and most innovative products in natural, organic and healthy living,” which attracted 53,000 attendees last weekend. What was conspicuously missing at many exhibitor booths at the Expo: Gluten. 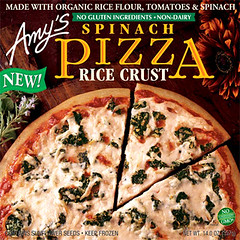 Yes, I realize there are people with celiac disease who can’t eat gluten and people who have less severe gluten sensitivities who’ll benefit from this growing gluten-free market. But there are also many more people who have no gluten issues whatsoever but have convinced themselves they do after reading a magazine article. There are others who’ve been told by rather questionable nutritionists / kinesiologists that they’re “allergic” to wheat or gluten — despite the fact that allergic reactions to wheat are extremely rare and are unrelated to gluten sensitivity.

Add to that group the people who just follow fad marketing gimmicks — people who’ll think of the words “gluten-free” on a package as a bonus health benefit despite the fact that they themselves have no actual gluten issues — and we’ve got a huge market for gluten-free foods indeed.

I find it telling of our times, when people often seem more concerned about avoiding ingredients than getting nutrients. Part of this we’ve brought on to ourselves, since our crazy world’s put more crazy stuff in our food than ever — and also has made more people allergic to more things than ever. Still, the “lists of lack” proudly displayed by so many health and natural food products today seems crazy too. A sampling:

To be clear, I did taste and like some of this stuff. Of the pizzas, Amy’s gluten-free soy cheese slice, I must admit, was quite tasty. And Coconut Bliss is one ice cream I’ve already recommended that boasts a long list of lack….

I guess this is again one of those posts where I’m not quite sure where I’m going. I find the “lack-marketing” phenomenon bizarre, yet sometimes useful and kinda tasty…. Do you seek out gluten-free foods?

Ga ga for gluten-free food
Today, “natural” foods seem to be defined primarily by lack: Not by what’s in the product, but what’s not.