Want a job? Find one faster by seeking out a green one. Three studies link sustainability with economic benefits. 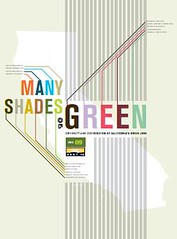 Those findings comes courtesy of Next 10, an organization that put together a new report called “Many Shades of Green: Diversity and Distribution of California’s Green Jobs” (PDF). In Los Angeles county alone, energy generation jobs grew by 35 percent, energy efficiency jobs grew by 77 percent, and green transportation jobs grew by 29 percent between 1995 to 2008.

Next 10’s report is one of the many studies about green jobs and the green economy in California the last few weeks. For more forward-looking analyses, check out:

>> Greening Los Angeles: A Case Study of Green Retrofits of City Buildings as a Model for Regional Equity in the Green Economy. This one’s a must-read for environmental justice activists. Put together by the Applied Research Center, a think tank on racial justice, this case study profiles how two community organizations — Strategic Concepts in Organizing and Policy Education and the Los Angeles chapter of the Apollo Alliance — managed to get a green retrofit ordinance passed, thereby creating jobs for women and communities of color.

This study’s part of the Green Equity Toolkit, put together to help women and minority groups — and the organizations that serve them — to “maximize and share the benefits of green economy jobs.”

>> Climate Solutions and Economic Growth in California (PDF). Put together by the Center for Resource Solutions, a pro-sustainable energy nonprofit, this report analyzes four previous analyses studying the costs of implementing California’s Global Warming Solutions Act of 2006 (AB32). The conclusion: “the costs of climate policy are far outweighed by projected economic growth.”

The more nuanced conclusion is that the California Air Resources Board’s analysis was in line with those undertaken by the University of California researchers and the Charles River Associates/Electric Power Research Institute — all of which come to the somewhat rosy conclusion above — while the fourth study by Varshney and Tootelian, which contradicts the others, uses faulty calculations. Read the full study for the full details.

Top photo via greentheblock.net; image by Next 10