Make your locavoring life a little easier with everything from an iPhone app to a veggie trading site. 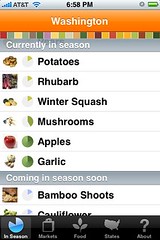 The combo of Michelle Obama’s new veggie garden at the White House and the latest link between red meat and an early grave has more people locavoring than ever. Here are some hacks to make your locavoring life a little easier:

• Don’t have your own veggie garden but still want to eat green? Download the Locavore iPhone app to keep track of what fruits and veggies are in season in your ‘hood, and what farmers’ markets are near you. An iPhone-free way of accomplishing this same goal would be to join a Community Supported Agriculture (CSA) program. (via Re-Nest)

• Getting too much kale, turnips and parsley in your CSA box? In Slate, Catherine Price enlists locavore Mark Bittman and cookbook writer Deborah Madison’s help — and shares their quick CSA box busting recipes.

• Grew too much squash this season? Veggie Trader lets you buy, sell or trade your extra bounty with locavoring neighbors. (via Treehugger)

• Wanna emulate Michelle Obama? You’re not alone — California’s first lady wants a veggie patch too! MNN’s own Robin Shreeves writes about Maria Shriver’s plans for an edible garden on the grounds of the state capitol: “Is this the first sign of the White House garden starting a domino effect?”

• Ready to recreate Michelle’s garden at your home? Consider first all the unsolicited gardening advice the first lady’s getting from gardeners and permaculturists, including, but not limited to, getting chickens already.

Related topics: Buy Local
Hacks for locavores
Make your locavoring life a little easier with everything from an iPhone app to a veggie trading site.