Happiness and the short commute

What really makes people happier: A home in the city or a Mcmansion in the suburbs? 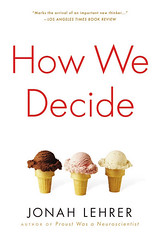 Did thinking too much about complex decisions lead to unhappiness and environmental ills in suburbia? In his book "How We Decide," Jonah Lerer talks about how too much deliberation can lead to terrible decision-making — namely, buying a big house in the ‘burbs — and a greatly diminished quality of life.

No, this quality of life issue isn’t related to the current mortgage crisis. Lehrer notes that when people are made to pick between a 3-bedroom apartment in the city with a 10-minute commute, and a 5-bedroom in the suburbs with a 45-minute commute, many people will pick the latter to their own detriment:

What’s interesting is that the more time people spend deliberating, the more important that extra space becomes. They’ll imagine all sorts of scenarios (a big birthday party, Thanksgiving dinner, another child) that turns the suburban house into a necessity. The lengthy commute, meanwhile, will seem less and less significant.

Unfortunately, in real life, the commute’s much more significant than the extra bedroom. Lehrer quotes psychologist Ap Dijksterhuis, who says “The additional bathroom is a completely superfluous asset for at least 362 or 363 days each year, whereas a long commute does become a burden after a while.”

And Lehrer cites some dire research that show how commutes make people unhappy — one study, for example, found that people with 1-hour+ commutes have to make 40 percent more money in order to be as “satisfied with life” as people with shorter commutes.

Of course, all that unhappy commuting also burns a whole lot of extra fossil fuels — and those big houses in the suburbs will generally have much higher carbon footprints than more modest homes in or close to the city. Stay happy and live closer to work — and for more insights into making happier decisions, check out "How We Decide." I also highly recommend Bill McKibben’s "Deep Economy," which, with a more eco-bent, draws some great connections between our suburban commuter culture and our general sense of isolation as individuals in contemporary society.

Why our job commutes are growing
Related topics: Green Commute
Happiness and the short commute
What really makes people happier: A home in the city or a Mcmansion in the suburbs?