Scientists tested 55 common consumer products that use high fructose corn syrup — and found mercury in 17 of them! 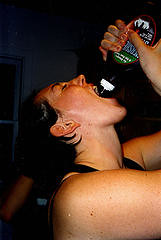 No, high fructose corn syrup’s still not good for you, no matter what the Corn Refiners’ ads say. In fact, those ads really sound ridiculous now that it’s not just obesity and diabetes we’re talking about. A group of scientists at the Institute for Agriculture and Trade Policy tested 55 common consumer products that use high fructose corn syrup — and found mercury in 17 of them! (via Ethicurean) 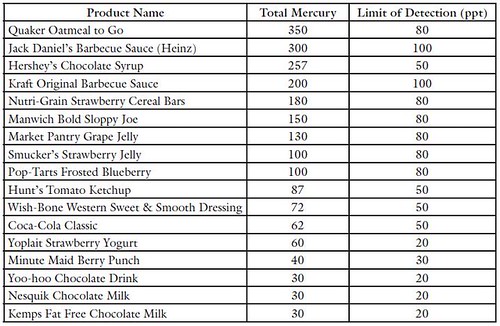 Don’t head to the emergency room yet though. While the study estimates “potential total mercury ingestion via HFCS of up to 28.5ug total mercury/day” for the average American, the study also says it’s “difficult to know to what to compare this figure.” Why? The EPA’s has a maximum recommended dietary intake 5.5ug/day of methylmercury – the form of mercury typically found in fish and seafood — but no recommendations for total mercury, which is what this study measured.

The bigger issue that this study points out is that the FDA’s known about these mercury contamination issues but has done nothing about them. The study calls on you to contact your elected officials, asking them to push the FDA on this issue and to force the chlorine plants that are still using mercury to transition to cleaner technologies.

Read the full report, “Not So Sweet: Missing Mercury and High Fructose Corn Syrup,” (PDF) for more details. If you were still pouring on the Hershey’s Chocolate Syrup despite its unhealthy high fructose corn syrup content, then maybe mercury will get you to switch to fair trade organic chocolate!

Hershey's Chocolate Syrup’s laced with mercury
Scientists tested 55 common consumer products that use high fructose corn syrup — and found mercury in 17 of them!