Know the fish you catch. A new fish guideline warns Southern Californians that some local fish shouldn't be eaten.

If your locavoring efforts include line-catching fish in local waterways, make sure to find out about potential health risks associated with your local fish. Southern Californians got a new set of safe eating guidelines for local fish — with far stricter warnings than before! 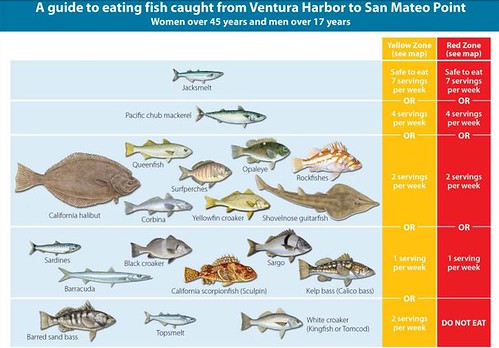 The problem: We’ve got PCBs, DDTs, chlordane, dieldrin and mercury in our water. As Mark Gold, president of local environmental nonprofit Heal the Bay explains: “DDT and PCB manufacturing was banned over 30 years ago, but there are still over 100 tons of DDT and PCBs contaminating the sediments off of the Palos Verdes coast.”

So, after analyzing a “total of 1,373 fish from 22 species or species groups,” the California Office of Environmental Health Hazard Assessment’s new guidelines (PDF) released new warnings for fish caught between Ventura Harbor and San Mateo Point. As you can see from the illustrated charts, some fish like barred sand bass, topsmelt and white croaker should be avoided altogether by everyone. 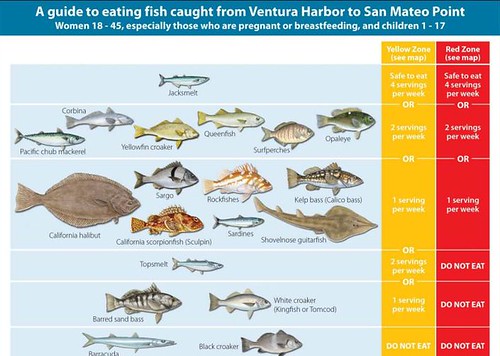 Though these new recommendations are tougher, Gold suggests that they’re still not tough enough. For one, the cancer risk for fish consumption was set at 1 in 10,000. “1 in 100,000 to 1 in a million is the norm and those ranges are the risk levels used by EPA,” Gold says.

In addition, the recommendations are based on skin-off filets. “That means that the risk to fish consumers is even higher if they eat whole fish or fish with skin,” Gold says. “The recommendations from OEHHA, although extremely scary, are definitely fishy in their underestimating of the health risks to substantial sensitive populations.”

To learn more about healthy and eco-friendly fish choices, see the Natural Resources Defense Council’s Sustainable Seafood Guide or pick up one of Monterey Bay Aquarium’s Seafood Watch cards. If you’re more the documentary film type, The End of the Line is in theaters now.

Local fishing's darker side
Know the fish you catch. A new fish guideline warns Southern Californians that some local fish shouldn't be eaten.