The Natural History Museum of Los Angeles plans to reclaim 3.5 acres for a green space that citizen-scientists can use to study urban ecology.

They unpaved a parking lot and put in paradise. Okay — perhaps paradise is a bit overenthusiastic, but a parking lot and its surrounding concrete and asphalt is getting ripped up from the middle of Los Angeles — to make room for 3.5 acres of urban wilderness experiences and exhibits at the Natural History Museum of Los Angeles.

That means the museum, located near the University of Southern California in Exposition Park, will go from looking like this: 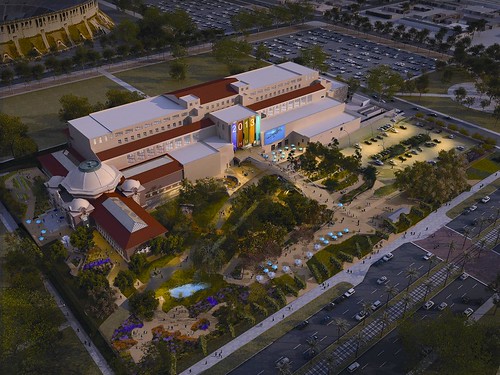 That transformation is expected to be completed July 2011. Right now, the north part of the Natural History Museum campus is deep under construction, and looks like this:

How did the museum find room for so much green space? By ripping up a parking lot. No, the parking lot’s not disappearing — city zoning laws still apply — but thanks to $10 million from the city of Los Angeles, the lot is going to be rebuilt as a 2-story, eco-friendlier structure with natural ventilation, run-off management and a living canopy with flowering vines and hummingbird and butterfly habitats.

That means the total number of parking spaces won’t change, but a lot of land will be freed up, letting the museum turn “very ugly hardscape to a vibrant, living, natural space, as Jane Pisano, president and director of the Museum, put it at the Earth Day announcement event yesterday morning. 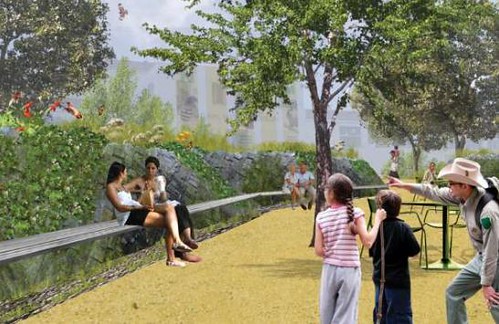 The city money — plus $20 million more being raised from individuals and private donors — will fund this outdoor transformation of the museum. Slated to open soon after the Expo Rail Line’s anticipated to open in spring 2011, the new revamped museum will have its signature “dueling dinos” sculptures moved to a new main entrance facing the rail station, a free entryway plaza where community members can sit amid greenery (artist’s rendering above), an entryway bridge with a whale-inspired design (photo of designers holding a model below), and a “strampitheater” (stair-ramp-ampitheater) that seats 400. 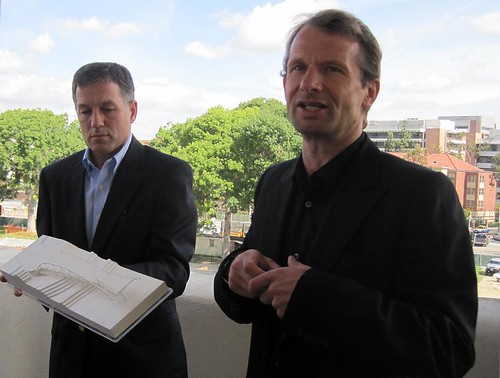 In addition, the east side of the museum will showcase a variety of habitats for exploration and study, from a Pollinator Garden with butterflies and bees to a pond with turtles and dragonflies (artist’s rendering below) to a “Get Dirty Zone” that invites kids to literally get in touch with the dirt and the little critters in it. 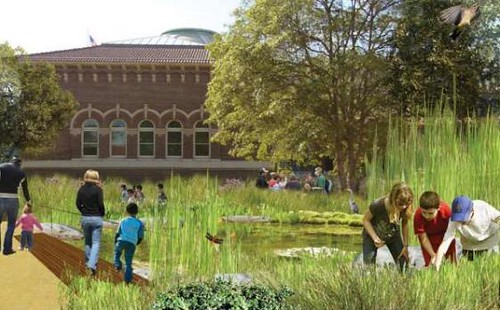 Once the museum’s outdoor section opens, urban visitors will get to interact with local plants, insects, and animals without ever leaving the city. These outdoor exhibits will focus not on exotic species brought in from around the world, but on native and introduced species found in the Los Angeles area. The idea: To study what’s happening to the ecology of Los Angeles itself — and to turn visitors into citizen scientists.

Can’t wait until July 2011 to get started? Then start counting lizards — because The Lost Lizards of Los Angeles project also officially launched on Earth Day. Conceived after Museum scientists were surprised by the lack of lizards in Exposition Park, this new project invites Angelenos to photo-document the lizards in their backyards and parks and submit them online for collective study.