New York to get more walkable

A chunk of Broadway is closing to cars -- and opening up to pedestrians. Oddly, the change is expected to speed up traffic!

If we could close one street in your town to cars, which would it be? In New York, that street's going to be a section of Broadway, thanks to the “Greenlight for Midtown” (PDF) project. (via kottke)

A big chunk of Broadway's going to be closed to traffic come May 24, making way for a pedestrian mall. Closing down the street’s actually expected not just to make Broadway a pleasant place for pedestrians, but also to relieve congestion and speed up traffic, too. 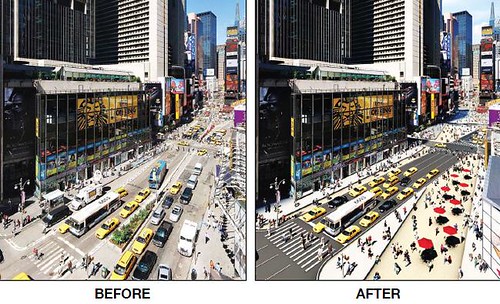 Above’s a look at how Times Square would change. If you're like me, you're wondering if The Lion King paid the city anything for such great promotional placement in its public education materials about the project.

Buses too are expected to go faster once Broadway closes down. Subways won’t be affected — but check out this app Triptop NYC that creates subway travel time heatmaps (via kottke). Type in a location for a visual guide to how long it’ll take you to get to various locations in the city via subway. The tool's sure to come in handy when you're trying to decide where you want to live -- provided that you want to live in New York.

Related topics: Alternative Transportation, Public Transportation
New York to get more walkable
A chunk of Broadway is closing to cars -- and opening up to pedestrians. Oddly, the change is expected to speed up traffic!