Small cities and a greener future

Consider the potentials of oft-neglected smaller cities, and the role they can play in our sustainable future. 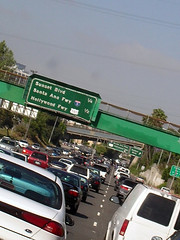 Big cities get a lot of attention in current green debates. After all, the density in big cities could allow for walkable neighborhoods,  efficient public transit and a slew of other green benefits that new urbanism experts tout. But in Boston Review, Catherine Tumber makes a convincing argument that looks beyond the big cities.

Tumber points out that while we hear a lot of talk about edible gardens and solar rooftops in metropolitan areas, smaller towns are in a unique position to tackle clean energy production and efficiency, as well as sustainable food production. In fact, Tumber calls for a focus on the potentials oft-neglected smaller cities -- and the roles these cities can play in creating a sustainable future:

Smaller cities will be critical in the move to local agriculture and the development of renewable energy industries. These tasks will almost certainly require a dramatic rethinking of land–use policy, and smaller cities have assets that large cities lack. Their underused or vacant industrial space and surrounding tracts of farmland make them ideal sites for sustainable land-use policies, or “smart growth.”

Part of the impetus for Tumbler's ode of sorts to smaller cities has to do with the fact that these cities — along with their potentials — got short shrift in past decades. Due to that oversight, we now have huge cities and their sprawling suburbs, as well as very sparsely populated areas, but very little in between the two. Writes Tumbler:

When it comes to the urban–rural divide, small–to–intermediate–size cities may offer the best of both worlds. For all the rural romanticism of the ’70s–era homesteading movement — or for that matter, the vaunted folksiness of “small–town values,”  — urban life has its allure. Smaller cities are large enough to offer the diversity, anonymity and vibrancy of urban culture, as well as levels of density that offer efficiencies of scale. They are also small enough to maintain proximity to sustainable food production and renewable energy resources.

Honestly, I love the big city. However, with the sprawling suburbs of Los Angeles, and their attendant crazy freeway systems — and those systems' attendant gridlocked traffic and pollution issues, not to mention the social isolation caused by un-neighborhood-y neighborhoods where people go from their home to garage without ever stepping outside, drive to work without talking to anyone, drive back into the garage and into the home — I wonder if there's some small townness that could be brought into the big cities to make us all happier. Perhaps allowing the space and potential for smaller towns to thrive could give us all a better idea of what to strive for.

Small cities and a greener future
Big cities get a lot of attention in current green debates. After all, the density in big cities could allow for walkable neighborhoods.