Slums could teach us a lesson in successful urban development. 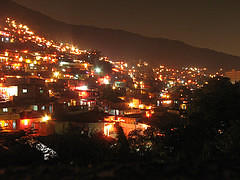 Slums and shantytowns aren't exactly sought-after neighborhoods, but some city planners see environmental lessons in them. In fact, some are turning to areas that most people consider urban blights to inform modern city planning. According to a recent article in the Boston Review, slums could teach us a lesson in successful urban development (via ideas):

Slums embody many of the principles frequently invoked by urban planners: They are walkable, high-density and mixed-use, meaning that housing and commerce mingle. Consider, too, that the buildings are often made of materials that would otherwise be piling up in landfills, and slums are by some measures exceptionally ecologically friendly.

Of course, slums have many downsides as well, ranging from basic sanitary issues to high criminal activity, depending on the area. However, urban planners are looking into whether the upsides of slums could be adopted in modern cities while the downsides aare avoided. Possible suggestions include revamping zoning laws "to allow residences to double as businesses," and adopting "the low-rise, high-density model, which is conducive to neighborliness and requires no elevators."

Some of the positive environmental aspects of slums — such as slum residents' use of discarded material to construct their abodes — are practices that are already being adopted by many planners, designers and architects. Read the full articlefor a fascinating look at the diversity of solutions people in slum areas have developed out of need, and how we might be able to adopt them in the future.

Sustainability lessons from slums
Slums and shantytowns aren't exactly sought-after neighborhoods, but some city planners see environmental lessons in them. In fact, some are turning to areas th