If you’re a woman who weighs less than 200 lbs, eating just one can of albacore tuna a week puts you over the FDA’s recommended limit for mercury. 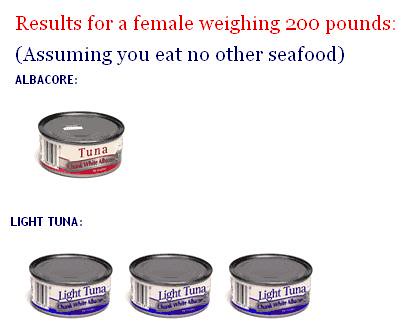 Not a lot, huh? Unbeknown to most tuna eaters, albacore tuna contains 3 times the amount of chunk light tuna. Since the amount of mercury in different types of fish differs very widely, health-conscious pescatarians should keep mercury levels in mind when picking what to have for dinner.

Oddly, even though the FDA does have an established daily limit for mercury, the agency doesn’t distinguish between different types of fish (or fish products). Instead, the FDA simply recommends up to 12 ounces a week of a variety of fish.

That’s why the nonprofit Environmental Working Group’s come up with its tuna calculator. This handy web app lets people figure out exactly how much canned tuna they can eat a week to stay under the FDA recommended mercury limit — while also educating them about the limited and conflicting information the FDA’s giving out.

Just plug in your age and gender to find out how much tuna you can eat safely. And remember that the predator fish that eat smaller fish — like swordfish, king mackerel, tilefish and shark — also contain a lot of mercury. To enjoy your fish safely, eat lower on the ocean food chain!

Related topics: Healthy Eating
Test your tuna knowledge
If you’re a woman who weighs less than 200 lbs, eating just one can of albacore tuna a week puts you over the FDA’s recommended limit for mercury.