The Poverty Diet: Guatemala vs. U.S.

Why do people in poverty lose weight in Guatemala -- but gain weight in the U.S.?

Yesterday, I covered eco-friendly diets for environmentalists looking to eat sustainably while dropping a few pounds after the holidays. Today, I ran across “The Poverty Diet,” a post by Vanessa Barrington on EcoSalon about how she lost 7 lbs during her vacation — by living with a family in Guatemala, where she was studying Spanish. 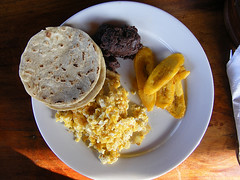 Vanessa details the 3 meals she had in a typical day: Very simple menus including a couple eggs, a little beans and chicken, and mostly tortillas. “Though I was hungry some of the time, I was living quite well compared to most Guatemalans,” Vanessa writes.

The menu actually sounds pretty yummy to me, except for the lack of veggies and fruits — but the meals certainly weren’t big, and there were no snacks to be had. What I found especially striking about the Guatemalan “poverty diet” is that it’s so different from what one might consider the U.S. “poverty diet.” While Guatemalans subsist on relatively unprocessed, simple foods, poor Americans — thanks to our skewed agricultural and food systems — often turn to fast food and junk food (both of which are mostly government-subsidized corn). 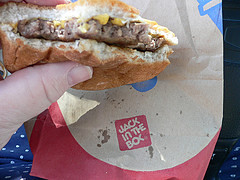 In fact, the current economic downturn has U.S. dietitians worried that people will pack on more pounds! Time magazine reports that “in a recent survey of nearly 500 registered dietitians and nutritionists, 56% of respondents said they were concerned that the economic downturn would have a negative impact on their patients’ ability to maintain or achieve a healthy weight. The reason? Junk food is cheaper than healthy fare. Plus, financial woes can be so distracting, people don’t pursue nutritional goals.”

The poverty = weight GAIN connection in the U.S. is something The Cancer Project’s worried about too. The nonprofit, concerned that money-crunched people will turn to unhealthy “dollar menu” fast food items, is working to educate people about how to make better diet choices on the cheap.

I’m not sure where I’m going with this. I guess I’m mainly struck by the fact that the poor in Guatemala seem to be eating more healthfully than the poor in the U.S. Obviously, poverty anywhere is a sad thing (though I’ll bet some readers are now tempted to do a Spanish immersion program to lose weight). Yet while Vanessa seems to have returned to the U.S. in relative good health, many of the poor in the U.S. will likely have to deal with totally preventable diet-related diseases in the future.

Read Vanessa’s whole post to learn more about poverty in Guatemala, where “the cost of basic food items has gone up 40% in the past two years, pushing many people into poverty.” And follow blogs like The Ethicurean to educate yourself about the problems with the agricultural and food systems in the U.S. — so you can get involved in reshaping it.

Related topics: Healthy Eating
The Poverty Diet: Guatemala vs. U.S.
Why do people in poverty lose weight in Guatemala -- but gain weight in the U.S.?