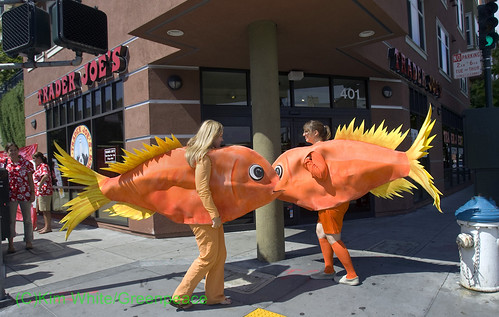 Remember how Trader Joe’s got an F on Greenpeace’s Sustainable Seafood Guide? The bad news for the popular retailer doesn’t stop there. Apparently, scoring even lower than Target and Wal-Mart when it comes to sustainable seafood has made Trader Joe’s a target for Greenpeace’s latest campaign: Traitor Joe’s. 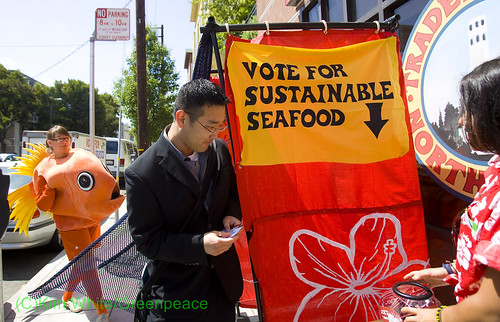 Greenpeace activists are protesting Trader Joe’s fishy policies both on land and line. San Francisco stores were treated to a fishy show — two activists dressed up as the endangered orange roughy, plus more activists in Hawaiian shirts like those worn by Trader Joe’s employees asking customers to vote for sustainable seafood.

I think the funnier part of the protest’s on Twitter though. @TraitorJoes tweets snarkily, defending his right to deplete the oceans of fish. The Traitor Joe’s spoof website welcomes visitors to its “one-stop-shop for ocean destruction”: “My favorite fish to devour are Chilean sea bass and orange roughy.”