A new study links vinyl floors to autism in children. 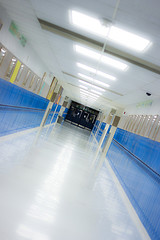 Latest scary news about PVC: Vinyl could cause autism.

Kids living in homes with vinyl floors, which can emit phthalates, are twice as likely to have autism, found a Swedish study published in the Journal Neurotoxicology. Scientific American reports on the study:

The scientists reported that they do not know if asthma and autism are related, or whether phthalates contributed to the risk of autism by some other mechanism, such as disruption of hormones. Phthalates in animal tests interfere with male hormones and sexual development.

According to Scientific American, rates of autism are going up very quickly. "Because genetics do not change that quickly, scientists suspect that chemical pollutants are probably playing a role.”

While most U.S. homes don’t have vinyl floors, carpeting could contain similarly scary chemicals — and some U.S. schools have vinyl flooring. This week, nonprofit Center for Health, Environment & Justice announced that it'll be launching a new campaign to get vinyl flooring out of schools.

Does your or your kids school have vinyl flooring? Find out, and if so, get involved with this environmental justice issue.