Who controls your food?

Think you know your food? Food, Inc. goes beyond the nutritional label to show us what we're really eating. 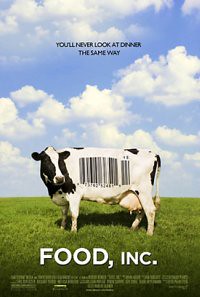 If you’re an environmentalist who twitches nervously whenever people start talking about food — because you never got around to reading The Omnivore’s Dilemma or Fast Food Nation — you’re in luck. The now eco-famous authors of those books — Eric Schlosser and Michael Pollan — have teamed up in Food, Inc., a new eco-documentary hitting theaters this month. Now, after just 93 minutes in the theater, you’ll be able to talk intelligently about eco-foodie issues with your more bookish friends.

Green-thinking farmers-market shoppers will already know about many of the issues addressed in Food, Inc.: fast food and obesity, factory farming, federal subsidization of corn, farmer bullying by genetically modified seed company Monsanto — the list goes on. But Food, Inc. will likely introduce you to some new eco-foodie concerns as well as illuminate the many interconnections between seemingly disparate problems.

Did you know, for example, about the connections between illegal immigration and factory farmed meat? Food, Inc. shows that big meat factories actively recruit from Mexico; it seems legal U.S. residents are less willing to work dangerous jobs for low pay without complaining. Hire illegal immigrants unlikely to get the law involved, and labor rights become easier for companies to abuse.

Of course, immigrants often are attracted to these jobs because NAFTA forced our southern neighbors to accept cheap exports of our subsidized corn, effectively putting local farmers who don’t get such subsidies out of business. That same subsidized corn is also what allows for our huge factory farms, which requires these cheap grains for animal feed.

Does it all come down to corn? A surprising lot of problems do. 80 percent of U.S. corn's genetically modified — which means most of that federally subsidized corn’s helping to line the pockets of Monsanto, the company that provides both the GM corn seeds as well as Roundup, the chemical herbicide those seeds have been genetically modified to resist. Farmers no longer get to own own seeds — and those who refuse to switch to Monsanto’s ways are slapped with unfair lawsuits that rack up such high lawyer bills that most farmers are forced to settle. Many politicians in Washington have Monsanto ties — leading to toothless regulatory agencies.

U.S. chicken farmers too become like indentured servants, because Tyson and other chicken companies require farmers to buy all their equipment from them. Many farmers take out loans to buy the startup equipment — and aren’t able to make enough to get out of debt — especially as Tyson and other companies force them to continuously pay extra to upgrade their equipment. Refuse to upgrade, and the companies will stop buying your chickens — most of which grow up in battery cages and can’t even walk.

Or does it all come down to fast food? Fast food changed how food’s produced, placing uniformity — and big suppliers who could produce this uniformity in huge volumes — above all. That way of doing business hurt small farmers and producers and replaced skilled workers with low-wage workers — both in restaurants and in factory farms.

There’s good news, too. Food, Inc. features everyone from a small and successful organic chicken farmer with a steady and grateful local clientele — as well as a huge organic yogurt company, Stonyfield (owned by Danone), that’s bringing healthier food to the Wal-Mart crowd. The film ends with ways you can get involved in the food fight — and the Food, Inc. website urges you to take action.

Food, Inc. opens in New York, Los Angeles, and San Francisco on June 12, but if you live in Los Angeles, you can take advantage of a FREE screening happening Thurs., June 4, at 7 p.m. at Whittier Village Cinemas, 7038 Greenleaf Ave, Whittier. The screening’s organized by the California Farm to School Program, a project of the Urban & Environmental Policy Institute at Occidental College. Post-screening, UEPI staff will lead a panel discussion “about the work we do in Southern California to build a stronger local food system and increase access for all to healthy, safe, and affordable foods.” RSVPs are required to 323.341.5091.

Related topics: Organic Foods
Who controls your food?
Think you know your food? 'Food, Inc.' goes beyond the nutritional label to show us what we're really eating.