Two environmental bloggers make separate arguments about why a shorter work week will better the planet. 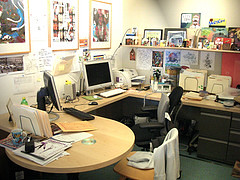 Need a reason to work less? A couple of bloggers have come up with two arguments for spending less time at the office — while feeling like you're doing the environment a favor.

At Grist, David Roberts volunteers to test out a policy that will boost the environment and create jobs —while letting everyone work less. How? Give businesses a tax incentive for shorter workweeks or work years. This work-less policy is a suggestion by Economist Dean Baker, who explains the economic benefits thusly:
The tax break would allow the employer to compensate workers for fewer hours up to some limit, say a maximum of $2,500 per worker. That would cut work hours but maintain staffing levels.

As a result, workers would be getting just as much money as before the reduction in hours —but putting in 10 percent fewer hours. If workers have the same amount of money, then demand in the economy will be the same. At the same time, firms would then need to hire more workers to meet this demand, since they would be getting 10 percent fewer hours from each worker.
Dave goes on to point out the ecological benefits of a shorter work week, including wasting less natural resources and polluting less.
At No Impact Man, Colin Beavan makes a similar argument. He wonders if simple living is the solution to our economic and emotional woes. “What if using fewer resources meant needing less money, meant having to work less hard, meant less depression and anxiety?” Colin asks. Colin suggests living simply, thereby reducing spending and stress and increasing relaxing time. That sort of lifestyle won't require as much money, allowing people to work less — and be depressed less.

Convinced to leave the office earlier today yet?

Work less, save planet
Two environmental bloggers make separate arguments about why a shorter work week will better the planet.