A Walker's weekend for Angelenos

The Big Parade invites all Angelenos to get out of their cars and start walking -- from downtown L.A. to the Hollywood sign.

Always wanted to be part of a walkable community? To get to know your neighborhood from a pedestrian’s perspective? If you live in Los Angeles, you can be part of a big walking community for a weekend. The Big Parade, a 2-day, 40-mile, 135-stairway walk happening July 18 - 19, invites all to join in the peripatetic fun. 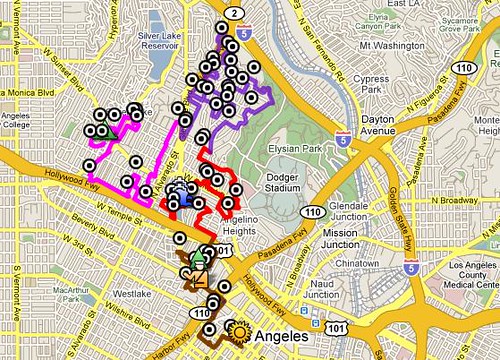 It all begins at the Angel’s Flight Stairway in downtown L.A. at 7 am on Sat., July 18. Walkers will collectively begin marching — passing by more than 50 historic and cultural landmarks, visiting community groups, and stopping to camp for a night near Sunset Junction, until they hike through Griffith Park to get to the Hollywood sign sometime on Sun., July 19! Check out the extremely detailed maps (day 1 above, day 2 below) to get a sense of all the L.A. you’d get to see.

The Big Parade isn’t a grueling marathon-esque event, since it’ll be broken up by, among other things, a paddleboat traverse of Echo Park Lake. The walking pace will be gentle enough for anyone to join — though there will be a lot of stairclimbing. The walk will be punctuated at various points by a marching band, games, and other shenanigans. 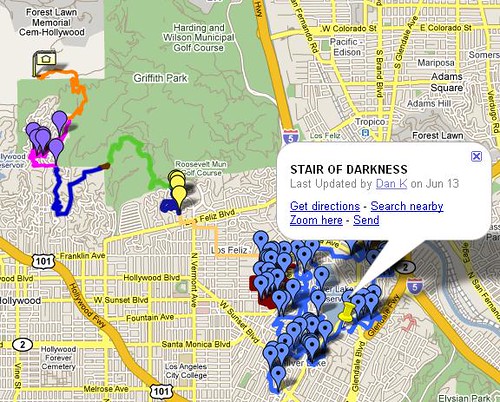 Dan Koeppel, the stair-climbing enthusiast who organized The Big Parade and, incidentally, the author of Banana, calls the event a “community participation walk/event/performance.” A core group of 10 or so walkers will do the entire event, with at least 50 more joining the walk for anywhere between 5 minutes to a day or more. He invites all to join — and especially invites community groups to get involved, telling the walkers about themselves as well as becoming part of the walk itself.

Why walk? Writes Dan in the event FAQ:

The short answer is that Los Angeles is a beautiful place to walk, and I wanted to find a way to express that. There’s a lot of effort put into “proving” how walkable Los Angeles is. What I hope is that this is a second-generation journey; proof has already been provided, and by gathering people from across the city and exploring together, we will celebrate something that has been evident from the start: that L.A. is best seen, experienced, and navigated - not just for fun, but as a day-to-day practice - on foot.

I’m planning to join the Sunday portion of the walk. What about you? If you’re interested, you can RSVP on the Facebook page — though really, you can just show up at a spot of your choice by following the highly regimented schedule online. If you want to camp, though, you’ll need to either commit to walking the whole thing or volunteering to be part of the support crew — and get approval.

Have bad knees but want to be part of the walk anyway? Follow @BigParadeLA on Twitter. Don’t live in L.A.? Organize a Big Parade in your town –

Related topics: Sustainable Communities
A Walker's weekend for Angelenos
The Big Parade invites all Angelenos to get out of their cars and start walking -- from downtown L.A. to the Hollywood sign.