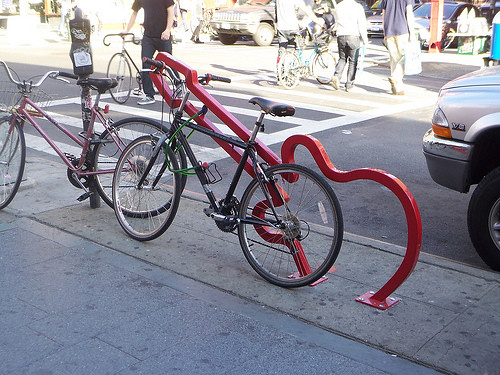 Think you can design a better bike rack? Cities are calling on creative cyclists to do just that. Last year, the New York City Department of Transportation held its CityRacks Design Competition, an international contest for new bicycle parking for the city. The contest inspired many creative designs!

Now, the East Hollywood neighborhood of Los Angeles is running a similar competition. Los Angeles’ Council District 13 is presenting a Bicycle Rack Design Competition that welcomes all designers and artists living in L.A. county to submit their two-wheeler inspired sketches. (via Streetsblog LA and LAist)

The rack basically needs to fit at least two bikes, should not get in the way of pedestrians, and should last at least 10 years. Read the competition guidelines carefully to make sure your rack idea meets the regulations. If you're an L.A. county resident, get your sketches in by 3 p.m. on Friday, March 6, 2009. If your design wins, you’ll get $2000 — and your bike rack rendering will be actualized and installed along Hollywood Blvd. between Western Avenue and Vermont Avenue in Los Angeles.