Permaculture co-founder David Holmgren says we should prepare for an "energy descent" future. 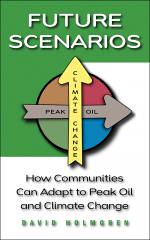 Since Obama became president, we’ve heard a lot about stimulating our economy with green jobs — with the implication that green tech can save the environment while also promoting economic growth. But not all enviro-minded people see such economical synergy when looking to the future with green-tinted glasses. In fact, David Holmgren, best known as one of the two co-originators of the permaculture concept, sees economic decline as inevitable — and he’s actually looking forward to that decline.

How did David come to that conclusion? In his new book, Future Scenarios, How Communities Can Adapt to Peak Oil and Climate Change, David outlines four different future scenarios that’ve been proposed by scientists and environmentalists:

The “energy descent” scenario is our most likely future, considering the dual pressures of climate change and peak oil we are facing now, according to David, who lays out his case in some detail in Future Scenarios. I still think the jury’s out — you can read about some leading scientists’ predictions in the New York Times, and you can read futurist Jamais Cascio’s predictions on what the next 40 years will look like. Jamais’ scenario’s closer to the “techno-stability” scenario and is thus more optimistic — at least after you read past the “dieback of human population, due to starvation, disease, and war” bit ….

The energy descent scenario seems a bit convenient in terms of David’s argument, since David also believes an energy descent scenario would inevitably lead to permaculture-inspired ways of life, thereby making David’s permaculture concept the future of human civilization. Still, I found interesting David’s hope-in-doom-and-gloom stance: “There is a desperate need to recast energy descent as a positive process that can free people from the strictures and dysfunctions of growth economics and consumer culture.”

David sees four possible scenarios for energy descent — illustrated by the four quadrants on the book cover diagram — depending on how catastrophic climate change ends up being and how quickly fossil fuels run out. If climate change is slow and fossil fuels last a while, we get a “green tech” world — a lot like the Techno-stability scenario but with economic shrinkage, not growth. If climate change happens fast and fossil fuels run out quickly, we get a “lifeboats” scenario — a lot like the Collapse scenario, except some human knowledge and history gets retained in the much smaller population.

In between those extremes are “Brown tech” (fast climate change, slow oil decline) and “Earth steward” (slow climate change, fast oil decline). David speculates on what the economic, environmental, political and cultural results of each of these scenarios will be — an exercise that’s sometimes fascinating, other times entertaining. What would happen to someone like me under the Brown tech scenario, for example? Writes David: “Large numbers of homeless ex-urbanites form a new underclass lacking even the skills of poverty.” Apparently I’d end up trudging over to a farm to try and get some work there.

Future Scenarios is a rather dense academic read, packing a lot of heavy text into its 128 pages. The book’s available for $9.41 at Amazon.

Related topics: Environmental Science, Green Energy
Book review: Future Scenarios
Since Obama became president, we’ve heard a lot about stimulating our economy with green jobs — with the implication that green tech can save the environmen