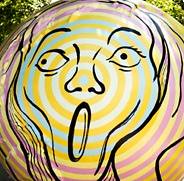 Back in 2007, I saw Cool Globes — a public art exhibition of 100 globes custom-designed by artists around the world “to raise awarenes of global warming and inspire individuals and community leaders to embrace solutions” — displayed along Chicago’s lakefront while in the Windy City for the BlogHer Conference. Almost two years later, the globes are still rolling across the nation — and on Earth Day, into Los Angeles.

Since each globe is 7 feet in diameter and weighs 2000 lbs, the exhibit isn’t easy to move around — though that hasn’t stopped the exhibit from traveling all over, most recently to San Diego. Now, 50 of the globes will be rolling into L.A.

The Cool Globes grand opening happens April 22, starting at 11 a.m., at the Rose Garden at Exposition Park. The free public event — with free refreshments and live music — will include an unveiling of six new globes designed by L.A.-area artists and students from Manual Arts High School and A Place Called Home youth center. Eco-activist Laurie David, L.A. Councilwoman Wendy Gruel, and Wendy Abrams, founder of Cool Globes, will all be there to speechify.

If you can’t make it to the event, you can still stop by the Rose Garden any time before July 23 to see the Cool Globes. After that, the globes will be heading to Houston for the fall!

Photo of “First We Scream, Then We Act” globe designed by Nancy Steinmeyer via Cool Globes