Dole threatens to sue over a documentary about banana workers to be screened at the L.A. Film Festival. 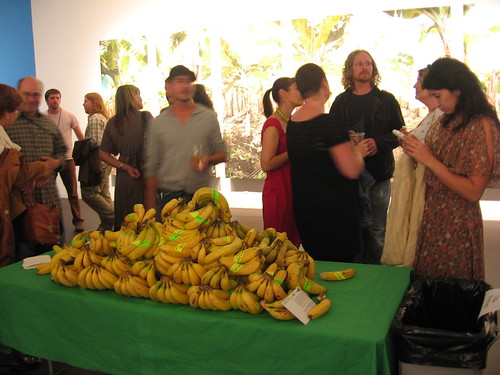 Show your Bananas and we’ll sue! That’s what Dole Food Co. is threatening in its efforts to halt the screening of a film that critiques its business practices.

While Angelenos unpeeled the socio-political history of the banana through participatory art at the Fallen Fruit exhibit on Tuesday (photo above), more socio-political banana history was being created in L.A. around the Los Angeles Film Festival.

The fruity battle’s over Bananas!*: A Case Study, a documentary made by Fredrik Gertten about the legal clash between Nicaraguan banana plantation workers and Dole. The story follows the workers who take on a multinational company for spraying the pesticide dibromochloropropane, stuff that’s been banned in the U.S. since 1979, according to the L.A. Times, and stuff that the workers say made them sterile. However, the story is apparently more complicated than portrayed in Bananas! Reports the L.A. Times:

In a 2007 jury trial before Los Angeles County Superior Court Judge Victoria G. Chaney, Dole lost and was ordered to pay $1.58 million to four of the dozen Nicaraguans claiming injury in that case, several of whom are depicted in Gertten’s film. Dole is appealing that case.

Then this spring, in a dramatic reversal of events, Chaney threw out two other lawsuits against Dole after being presented by Dole investigators with evidence gathered from Nicaraguans who said that they had been recruited and coached by lawyers, outfitted with false work histories and falsified medical lab reports, and promised payouts to pose as pesticide victims.

Because Bananas! was finished before this spring, the film doesn’t cover the new developments. Still, many environmental and social justice activists are weighing in with their own opinions. The Fair Food Fight blog, for example, argues that one bad lawyer’s actions doesn’t change the reality of Dole’s use of the harmful pesticides — and their consequences (via Small Farmers):

Dole acknowledges that it used a devastating pesticide (called DBCP and known by friends as “nemagon”) in banana plantations in Nicaragua, the Philippines, Honduras, the Ivory Coast, Costa Rica, and other banana-growing countries, and that that pesticide in all likelihood caused sterility in thousands of male banana plantation workers, miscarriages in women, and other serious health effects back into the mid-seventies…..

Dow Chemical, the producer of DBCP, said it wouldn’t sell the pesticide to Dole anymore because the chemical was too dangerous, or the fact that Dole threatened Dow Chemical with a breach-of-contract lawsuit if it didn’t keep selling the chemical to the fruit company (from the book "Banana" by Dan Koeppel). It also ignores the fact that Dole has settled quite a few of these farm worker cases out of court.

For now, the L.A. Film Festival has moved Bananas! from the “competition” to the “case study” category, with a promise that “the festival screenings will be prefaced by a statement, written and delivered by festival organizers, that the organizers intend to place the controversy surrounding the film in context,” then “followed by a discussion of the issues the movie raises.”

Related topics: Education, Toxins & Chemicals
Dole fights against 'Bananas!'
Dole threatens to sue over a documentary about banana workers to be screened at the L.A. Film Festival.