Don't join 'The Age of Stupid'

<i>The Age of Stupid</i> shows how we rationalize our decisions to do nothing despite the fact that we need to act now.

If Orwell’s 1984 didn’t seem hard-hitting to you because you, well, read it after 1984 — do yourself a favor and watch The Age of Stupid, because you’ll want to know the future we really are going to have unless you, yes YOU, do something.

That’s right — you, and me, will decide whether or not the human race gets decimated. The science now agrees on this. This week, the U.N.‘s top climate scientist Rajendra Pachauri — chairman of the Intergovernmental Panel on Climate Change — basically said that unless we drastically cut carbon emissions now, most of us’ll be dead soon.

More accurately, Rajendra said we need to “keep atmospheric carbon dioxide concentrations below 350 parts per million (ppm).” That means we need to make sure “global greenhouse-gas emissions peak by 2015 and rich nations slash their carbon pollution by 25 to 40 percent, compared to 1990 levels, by 2020.”

Of course, this is something enviro-activists, like 350.org dude and my hero Bill McKibben, have been saying for years. This is also something we haven’t actually taken any serious action towards achieving, and something that won’t get achieved unless we force our politicians to commit to serious action come the UN Climate Change Conference in Copenhagen in December 2009 — a meeting that’ll put together the successor to the Kyoto Treaty. 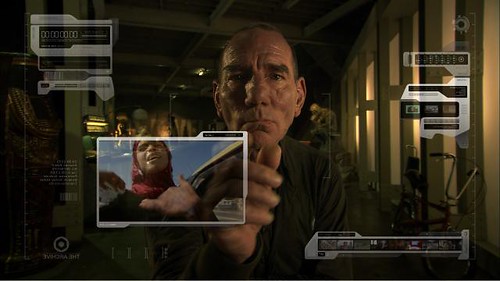 That UN conference is exactly the current impetus behind The Age of Stupid, a new eco-documentary with a slight sci-fi perspective. The film’s technically set in 2055, with the last man (Pete Postlethwaite, above) who’s archived human history finally looking back, wondering how we could’ve just let ourselves commit massive genocide despite the knowledge that we could have chosen otherwise.

Pete’s character looks back to the many warning signs we chose to ignore — and in the film, these “memories” are flashbacks that are actual, real-life docu-stories of what’s been happening around the world recently. The hurricanes, floods, fires and droughts that we chose not to get seriously worked up about — we see and hear about them.

But more movingly, we hear the personal stories. We see Al, a man who not only survived but also rescued his neighbors post-Katrina, who talks about how losing everything made him rethink what’s important in life, who spends a lot of time in natural habitats and says he’s an environmentalist — but who’s worked for Shell for decades.

We see Layefa in Nigeria, who knows Shell brought no economic benefits to her country, who sees her relatives and neighbors die from contaminated water partly due to Shell’s presence, who get uber-motivated to become a doctor to help those around her — who enters the black market for diesel to finance her career ambitions.

We see Jeh, a rich Indian dude who seems to consider himself a humanitarian of sorts, who wants to make travel less tortuous for his fellow countrymen. He decides to start a cheapo airline that’ll let people fly low cost, carbon emissions be damned.

We see a British woman fight tooth and nail against a wind farm that’d produce clean energy — basically because she doesn’t like the aesthetics of a wind farm. Of course, she considers herself an environmentalist….

The scary thing is, we are all doing these idiotic things despite the fact that science — and even all visible, smellable, feelable evidence — points to the fact that we are very close to exticting ourselves. Seriously.

Think The Age of Stupid’s exaggerating? Well then you haven’t been reading the news. So you know, we’ve RIGHT NOW got a wildfire in Angeles National Forest exacerbated by extreme fire conditions. We got a warning this week that “U.S. national parks could be changed so significantly by global warming.” We got yet another study this week warning that U.S. crop yields will go down pretty drastically unless we take serious action against global warming.

How can we not be taking serious action in light of this news? How have we gotten so complacent? Because in addition to the current news of eco-catastrophe, we’ve also got news that the wind turbine industry’s not doing so well due to low demand.

Are we really this stupid?

I’m of the opinion we need to take some serious action, i.e. take to the streets, Earth Days-style, to demand some serious decisions at the UN level.

Otherwise, we WILL die. Right now, we’re acting like teenagers who smoke cigarettes because they somehow consider themselves exempt from the whole cancer thing, who don’t realize real life consequences, i.e. drive drunk and you could very well die, apply to them, too.

We’re old enough to know we’re not invincible. So why are we acting like like we are — or at least acting like we’re okay with a society that’s blithely blindfolded to the future everyone in the know says is going to hit us like a humanity-killing ton of CO2 bricks?

What The Age of Stupid made me see, somewhat ironically, is how smart humans are — at finding ways to rationalize our idiocies. How can you work at Shell, or hawk black market diesel, and call yourself at environmentalist? Yet The Age of Stupid shows us how easily these rationalizations can be made — even by smart, well-meaning people. The film forces us all to re-investigate whether our own lives are really a step in the right direction — or just a patchwork of rationalizations.

The Age of Stupid’s directed by Franny Armstrong of McLibel fame — who engaged in an inspiring informal Q&A in the screening I went to at Paramount Studios last week. Someone asked what three changes she’d ask of people who’d seen this movie — and I loved how Franny refused to dumb it down for The Age of Stupid audience. Instead of pushing the same old “change a light bulb” thing, Franny encouraged everyone to seriously re-examine their lives. Are you making a difference with your 40-80 hour-a-week job? If not — CHANGE JOBS!

Watch The Age of Stupid, drag everyone you know to watch the film, then let’s hit the streets en masse and demand that Obama demand climate goals that’ll give humanity a chance.

The Age of Stupid officially launches Sept. 21 in the U.S.  — a  live event featuring Kofi Annan, Gillian Anderson, Mary Robinson, Pete Postlethwaite and Franny — and Radiohead’s Thom Yorke, who’ll give a short acoustic performance — from a solar-powered cinema tent in New York for people in 400 movie theatres right across the country. Buy a ticket now!

Image via The Age of Stupid

Related topics: Education
Don't join 'The Age of Stupid'
<i>The Age of Stupid</i> shows how we rationalize our decisions to do nothing despite the fact that we need to act now.