12 green-thinking cyclists biked 80-100 miles a day for 5 days straight to get to the Opportunity Green conference in Los Angeles. 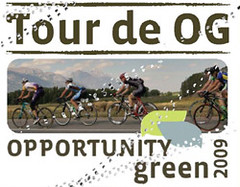 Why buy offsets to fly to a green business conference when you can bike there instead — via a 5-day, 450-mile ride with fellow eco-thinking travelers? That’s what 12 cyclists decided to do by joining the Tour de OG in San Francisco to bike down to the environmental business conference Opportunity Green in Los Angeles.

“People told me it was insane and crazy to do this,” said Karen Solomon, cofounder and CEO of Opportunity Green, ”but I thought people will create a whole new level of networking. They’ll share, they’ll know what they’re up to, and then they’ll support one another.”

The intrepid cyclists arrived in Santa Monica just a couple hours ago for a small finish line party, which I got to on my bike. Notice in the photo above how one of the bikes just doesn’t belong? Yes, that pink townie would be my ride.

Tour de OGers included no original gangsters as far as I know, but did include some long-term environmentalists like Anna Cummins (left, with me) of the Algalita Marine Research Foundation and Bring Your Own. Despite the fact that she completed the JunkRIDE bike ride from Vancouver, Canada, to Tijuana, Mexico earlier this year, Anna said the Tour de OG was a tough ride, covering 80–100 miles every day. “That was ferocious,” Anna said, “I mean, there were some powerful bicyclists in this group.”

“It was pretty aggressive in terms of the miles covered,” agreed Nick Aster (above) of green business blog TriplePundit, who helped with some aspects of organizing the bike ride. But Nick already plans to ride again next year. “We can a little cheekily say we’re walking the walk or riding the ride.”

Last year, I felt like I was the only one who went to Opportunity Green without driving, but this year, at least a few of the attendees will be biking. All the Tour de OGers I talked to said they planned to get back on their bikes to get to the conference.

Opportunity Green happens this weekend, Nov. 7-8, at the University of California, Los Angeles. Featured speakers range from Mayor Villaraigosa to controversial major corporations like Nike and Johnson & Johnson to Annie Leonard of The Story of Stuff and James Sutandyo of Causecast. Registration costs $995 ($495 for students).