How to become an Eco Baron 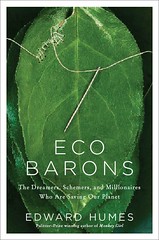 So how does one become an environmental hero these days — since the “turn a powerpoint presentation into a film” thing’s already been done? Would-be worldchangers can pick up Eco Barons: The Dreamers, Schemers, and Millionaires Who Are Saving Our Planet for some inspiration. Published earlier this month, Eco Barons by Edward Humes, details how a dozen or so environmentalists forged their individual green paths to achieve big green dreams — like the Rockefellers and Carnegies, except for environmental causes.

The profilees in Eco Barons are quite varied and eccentric, but the most common path to becoming an eco baron seems to be to make a lot of money in business — then to spend the money on nature conservation and restoration. That’s the path taken by both Doug Tompkins, the founder of North Face and Esprit who cashed out to buy up huge chunks of Chile for preservation, and Roxanne Quimby, who sold Burt’s Bees to Clorox to purchase big parts of Maine for a gigantic park.

While the enviro-goals achieved by these eco barons are indeed incredible, the personal stories of the individuals themselves are the most fascinating. Doug, for example, ran an ahead-of-his-time “Buy only what you need” campaign in his Esprit catalogue back in the 80s — only to abandon the company later on because the business’ consumerism didn’t jive with his ideals. Roxanne, on the other hand, was a real crunchy environmentalist living in the middle of nowhere, scraping together a hippie-ish living by selling a neighbor’s locally-harvested honey at farmers’ markets.

Eco Barons tells the scrappy enviro-stories of less rich people, too, like the work of plug-in hybrid inventor and teacher Andy Frank, or the people at the Center for Biological Diversity, an organization that got the Bush administration to finally admit to global warming. Peter Galvin, one of the people behind the Center, apparently tells people he’s “harnessing the power of OCD” to maintain a huge database of species — and he’s not joking.

Want to become an eco baron? What I get from the book is that you don’t need to be born rich — but it helps a lot if you become rich without losing your eco-ideals. And eccentricities help — so embrace your eco-quirks! Eco Barons is available in stores now for $24.95 ($17.15 at Amazon)