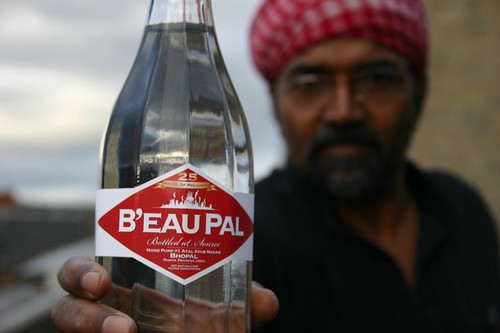 Less than a month after making fun of a real bottled water company by rebranding it as Deception, The Yes Men are now creating their own bottled water, B’eauPal.

As you may have guessed, B’eauPal’s the faux French name for the chemical tainted water in Bhopal, India, where 25 years ago, a huge industrial accident resulted in a huge chemical spill that killed thousands of people. Believe it or not, that horrendous spill still hasn’t been cleaned up — neither by Union Carbide, which created the accident, nor by Dow Chemical, which bought Union Carbide in 2001.

That means Bhopal residents still have contaminated water. Which is why The Yes Men have now taken Dow Chemical’s “Let them drink B’eauPal” attitude and given it a fresh and attractive packaging, thanks to some help from London design firm Kennedy Monk. The Dow Chemical logo-inspired B’eau Pal logo’s affixed on an elegantly shaped bottle, which lets would-be drinkers know that “The unique qualities of our water come from 25 years of slow-leaching toxins at the site of the world’s largest industrial accident.”

The sad hilarity doesn’t stop there. B’eau-Pal comes with an ingredient list that boasts the bottle contains dichlormethane, carbon tetrachloride, and chloroform — chemicals that create health problems ranging from optic neuropathy to hepatitis to burns to coma to death.

Watch the hilarious video when the activists hype B’eauPal on the streets on London. The Yes Men actually tried taking B’eau Pal to Dow Chemical offices — to find that the company employees had locked up the office and run away for the day!

This isn’t the first time The Yes Men have gone after Dow Chemical about Bhopal. In fact, one of The Yes Men’s biggest pranks happened five years ago, on the 20th anniversary of the Bhopal disaster, when one of The Yes Men managed to successfully impersonate a Dow Chemical spokesperson on the BBC and “announcing” that the company would finally clean up the mess in Bhopal!

That fake news made Dow’s stock dip $2 billion temporarily — but unfortunately, still hasn’t gotten Dow to clean up its act. Find out more about the disaster and how you can help at The Bhopal Medical Appeal.