Oil spill news got you down? Don't get sad — get passive-aggressive! These pros show you how: 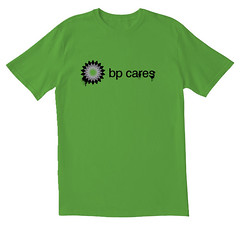 >> Wear a satirical “BP Cares” T-shirt. Available at streetgiant, the shirt costs $25 — with all proceeds going to given to Gulf Restoration Network. (via Grist)

>> Cook up some oatmeal and send it to BP. Writes Carl Hiaasen for The Miami Herald:

British Petroleum announced today that it has fired its top engineer for safety design and replaced him with Jody McNamara, age 12, a sixth-grade honors student at the Dwight Eisenhower Middle School in Tulsa, Okla. ...

In his winning essay, McNamara proposed several possible options for sealing the ruptured oil pipeline. He said the most promising plan would require “a super-long straw” and approximately 3,700 metric tons of Quaker oatmeal.

“You ever let that goop sit in a cereal bowl for an hour or two? It turns to rock,” the sixth-grader explained at his press conference. “There’s nothing that stuff won’t clog up.”