No Impact Man: Freedom from toilet paper (and other more important stuff)

Colin Beavan's new book, 'No Impact Man,' urges us to rethink our definition of freedom. 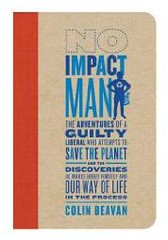 We’ve all got our weird hypersentivities, thanks to our quirky upbringings, less-than-ideal teenage years, and uniquely strange interactions with other people and their own weird quirks and hypersensitivities. Want to know what Colin Beavan — a.k.a. No Impact Man, who tried to bring down his environmental footprint down to as close to zero as he could for a year — is curiously sensitive about? Just say these two words in his presence: Toilet paper.

Yes, the man who had the audacity to forgo the papery stuff for almost a year now practically lashes out when you dare say those two words next to each other. The world’s in crisis, and you want to talk about toilet paper? Colin will say — nevermind that he talks about the toilet paper issue in his blog, movie, and his book.

In fact, in his book — "No Impact Man: The Adventures of a Guilty Liberal Who Attempts to Save the Planet and the Discoveries He Makes about Himself and Our Way of Life in the Process" — Colin touts how his family decided to forego toilet paper during the year of eco-experimentation — before bitterly talking about a New York Times article about him dubbed “The Year Without Toilet Paper” and a radio show where he shamed a host for daring to ask how exactly he managed to do without the stuff.

But surely, each of us can name our own “toilet paper” — the weird eco-something in our lives that makes us strangely defensive, guarded, or overly reactive. And while Colin may now practically twitch and spew steam out his ears at the mention of the words toilet paper, he’s also got a lot of fantastic wisdom to share about how living green is less about deprivation and denial and more about freedom and flexibility — even when it comes to denying yourself (toilet paper) or electricity from the grid:

We all think that the stuff and the energy and the accoutrements of modern life make us free, but until I took some time to do without them, I never got the chance to see the extent to which they also trapped me. Having electricity trapped me into the “freedom” of working at night….

"No Impact Man" the book chronicles Colin’s efforts to go uber-green — way greener than even most of the seriously eco-minded people in your ‘hood are willing to go. After all, many urban environmentalists big up public transit. Colin, on the otherhand, made a concerted effort to get off the train and onto his bike (granted, a comparatively easy luxury in the compact, subway-happy NYC). And he did away with even organic convenience foods and disposable goods too.

Colin’s experiment forces you to ask yourself: What happiness does our so-called productivity — and the convenience we buy through it — actually give us? According to Colin, “growth in the economy … could also mean that we’re all working ten hours a day instead of eight.” Is that really convenience and freedom?

Is working long hours to pay for an expensive car that we have the “freedom” to get stuck in traffic in 3 hours a day to get to and from an expensive house in the suburbs where we don’t even have the time and energy to get to know our neighbors really freedom?

And while we’re asking questions, what difference can just one person make, really? Aren’t we, for the most part, helpless actors stuck in the results of myriad policies that make individual eco-choices — whether for renewable energy or carbon caps — near impossible?

These, in short, are answers Colin sets out to answer through his one-year experiment — and reveals his findings about in his resulting book. Read "No Impact Man" to find out what eco-changes made Colin rethink his definition of freedom — and what changes made him realize that foregoing modern conveniences can, in some cases, mean a dip in personal happiness.

No Impact Man the book’s now available at bookstores across the nation. And "No Impact Man" the movie opens today in New York and Los Angeles — then in other theaters across the country next week.