No Impact Man reveals the simple, lasting pleasures that come from living mindfully -- even in a busy metropolis. 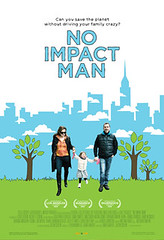 If you’re like most environmentalists, you’ve tried putting your life through one of those online carbon footprint calculators — you know, the kind that tells you we’d need 4.5 Earths or so to sustain your current lifestyle. And if you’re like most, you’ve managed to bring down that number of Earths somewhat — though not down to one.

That’s one reason why one New York family’s effort to bring that number all the way down to zero has proved fascinating, inspiring, and for some, skepticism-inducing. For one year, Colin Beavan, a.k.a. No Impact Man, got his wife, Michelle Colin, and their 2-year-old daughter to try an eco-living experiment: Living a zero-impact life. Colin lived, blogged and spoke at all manner of media outlets about this green experiment, and now, a documentary film about that effort — also dubbed No Impact Man — is hitting the big screen.

Michelle, for one, was a woman who’d spend $900+ on a pair of designer boots — but comes to love getting around town on a scooter or bike. Colin initiated the No Impact experiment, but goes through low moods when he questions whether his efforts will be worthwhile or meaningful at all. And the two have heartfelt fights, not just over maggoty compost and hippie coolers that just don’t work — but also about Michelle’s desire for a second child.

In the film, Colin notes that the year-long experiment is more philosophical than scientific. After all, no hardcore number crunching went into figuring out exactly what environmental impact the No Impact lifestyle made. Much of the experiment, in fact, hinged on intangible, unmeasurable effects — the community created by pitching in at an urban garden, the relationships strengthened by turning off the TV, the less hectic plans that seemed to let weekends stretch on and on.

No Impact Man in fact shows how our perceptions of pleasure — and appreciation of simple joys — change as we change our lifestyle. When the fridge and freezer are excised from the No Impact lifestyle, some family friction results. But after a while, the couple adjusts — and Michelle begins to cheats a little by getting ice from the fridge at her workplace. The big smile that a simple cup of ice water puts on her face makes you rediscover how much of our lifestyles of conveniences and satisfactions we too often take for granted.

Directed by Laura Gabbert and Justin Schein, No Impact Man opens in New York and Los Angeles on Sept. 11 — then goes national on Sept. 18.

• Catch up on the latest environmentally themed movies.

Related topics: Celebs, Education
No Impact Man: The sustainable joys of sustainable living
No Impact Man reveals the simple, lasting pleasures that come from living mindfully -- even in a busy metropolis.