The eco-conscious musical duo's eco-packaging for a self-released CD nabbed a Grammy nomination. 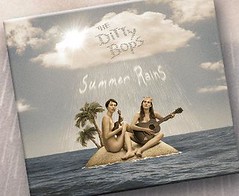 An eco-friendly CD package got nominated for a Grammy this year! And although The Ditty Bops’ self-released Summer Rains didn’t win, the 100 percent recycled paper pop-up packaging — printed with soy-based inks to boot — is a whimsical eco-inspiration — as are the musicians behind it.

The Ditty Bops are well-known in the green community as a bike-riding, byo-bagging duo — Amanda Barrett and Abby DeWald — who have inspired Grey’s Anatomy fans (six of the Ditty Bops’ songs have been on the ABC show) and treehuggers alike. In 2006, The Ditty Bops went on a bike-fueled tour, two wheeling it all the way from Los Angeles to New York City, even hanging out with Bike Hugger during the trip!

Amanda and Abby have also created their own eco-nonprofit, You And I Save the World, which encourages everyone to sign a Plastic Reduction Petition that personally commits them to BYO-bagging AND calls on the EPA “to create a plan to implement a national plastic bag tax in order to dramatically reduce the use of single-use plastic bags.”

Lately, the Los Angeles-based eco-duo has gone through a lot of changes. For one, Amanda and Abby are no longer officially The Ditty Bops; they’ve instead launched a new self titled art and music collective. For another, in October 2008, they got married in California.

I’ve yet to see Amanda and Abby perform live, but I hear the shows are often very theatrical, with fun period costumes and puppet shows! You can hear an interview about The Ditty Bops’ 2006 bike tour — and some of the duo’s music — in this NPR interview.