Can a fabby gay couple from the city become fabby biodynamic farmers? Apparently yes, at least in a new Planet Green show dubbed The Fabulous Beekman Boys. Those boys are Josh Kilmer-Purcell and Brent Ridge, two out and proud urban men who decide to try homesteading at an upstate New York farm, a.k.a. Beekman 1802.

“Who says gays can’t raise kids?” say the couple — while bottle-feeding a baby goat! The Fabulous Beekman Boys doesn’t begin airing until June, but I got to see a few clips at the Television Critics Association Cable Tour Panel earlier today. What I learned: Urbanites look funny when they try to farm. We see Josh and Brent buy a pair of cute piglets — that nimbly escape and tear across the farm, with the would-be farmers chasing after them in wide-eyed panic. 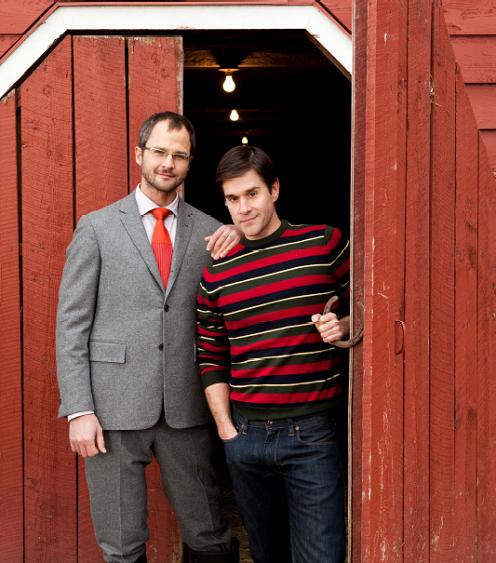 Luckily, the guys have the help of one Farmer John, who loves his goats so much he tears up while talking about them. On a panel at the TCA event, Josh and Brent talked about how the milk from Farmer John’s 80 goats got them making yogurt and cheese — then crafting goat milk soap (“It really was the best soap that we’d ever used”) — then starting a small soap business — then getting into arguments about all the work this eco-friendly endeavor entails. Because Josh still works full time in the city while Brent plans big events and projects at the farm, the couple ends up bickering fairly often on the show about how they spend their weekends.

Organic farming may not always be idyllic, but from what I’ve seen, The Fabulous Beekman Boys promises to be entertaining, often hilarious, and hopefully full of tasty organic, homegrown food. I’m told we’ll get to taste some food from the Beekman farm at a reception tonight; I’ll report back with a taste test!