The fray over GM food 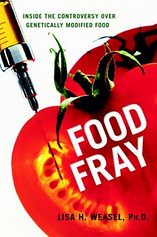 In the U.S., 80 percent of our corn, 86 percent of our cotton, and 92 percent of our soybeans grown last year were genetically-modified (GM) varieties — yet 60 percent of Americans don’t think they’ve ever eaten genetically modified foods. And even among the more enlightened 40 percent, I would bet only a small percentage know how much of GM food we’re eating — considering the fact that a huge chunk of the average American diet is made of corn — much less how safe GM foods are or what health and environmental problems GM foods could cause.

I certainly had a lot of questions myself when I picked up a copy of Food Fray: Inside the Controversy Over Genetically Modified Food by Lisa H. Weasel. My biggest question was this: Are genetically modified foods physically harmful?

I mean, I get that pesticide-intensive monoculture farming, subsidies for the products from these farms, and the subsequent eating of too much processed and fried corny stuff in general creates environmental and health problems over time. But does adding genetic modification into this mix create additional crazy health problems? Can “frankenfoods,” for example, cause birth defects or cancer?

The answer was complicated. In fact, I realized I was asking the wrong question.

At first, because I couldn’t get a simple answer to my GM question, Food Fray started getting annoying for me. Instead of giving definitive, scientific answers about the safety of GM foods, Weasel instead seemed to focus on the back-and-forth arguments of various groups, pointing out that both the GM-haters’ and GM-lovers’ impassioned arguments seem based not on science but on emotion.

But reading on, I realized that the questions I thought were less important were in fact the ones we should be focusing on. Debating whether or not eating a GM food can be bad for an individual’s health makes it seem like you can guarantee your own safety by avoiding GM foods. In reality, the problem of GM foods is wide-reaching; you can’t simply buy your individual way out of this problem.

The bigger problems of GM foods? For one, when we’re talking about the big GM crops in the U.S. like corn and soybeans, we’re talking about technified farming that depends on heavy chemical inputs. Basically, GM corn and soybeans have been specifically engineered to withstand heavy chemical pesticides, which are pretty much required when you have huge monoculture fields.

This method provides higher crop yields at first — boosted by chemical fertilizers — but creates environmental pollution. Over time, the soil’s depleted — and more resistant pests adapt to the pesticides, requiring more and stronger pesticides. Plus, planting so much of our farmland with a few types of GM seeds threatens biodiversity, which doesn’t bode well for our food security in the long run.

Despite the fact that technified farming isn’t sustainable, GM crops are still touted by big ag as solutions to hunger and poverty in developing countries. However, Weasel points out that the benefits of GM crops are seen more by big biotech companies than by the poor and hungry. For one, GM crops are patented — making food the intellectual property of big companies and wealthier nations. This means, among other things, that farmers in developing nations who convert to GM crops have to buy new seeds from these companies every year, instead of being able to save their own seeds.

And of course, the success of these GM crops require costly fertilizers and chemical inputs, also bought from these big companies. If a farmer buys GM seeds but doesn’t have enough money to buy as much of the chemical stuff needed, the promise of higher crop yields disappears. Plus, because these GM crops and their related chemical inputs have been engineered to deal with the pests and other issues specific to the U.S., they’re often not suited to the unique problems of, say, drought in Africa or pest insect species in India.

So instead of helping impoverished farmers pull themselves out of poverty, GM crops can make them more dependent than ever on the technified “solutions” of wealthier countries.

Add on top of that the fact that the big companies selling GM food are trying to strong-arm everyone from the European Union to Zambia to accept GM food imports or food aid, to doctor studies that expose health or environmental concerns about GM food, to cover up shortcomings of GM crop farming in India and other countries, and to push everyone from the FDA to academic scientists to do their bidding, and you start to feel big business interests completely undermine any socio-economic benefits that GM research could yield.

Which is to say that there are plenty of bigger and more important reasons for avoiding GM foods, even if eating GM food in itself didn’t lead to cancer or serious health risks.

We do know of one GM-tainted food that really could pose health risks though: rBGH milk. Yes, that would be pus-tainted milk from cows given genetically-modified hormones, which more and more people and companies rejected to the point that Monsanto finally sold off its rBGH biz. Read Food Fray to find out how the fact that rBGH-treated cows were giving birth to seriously deformed calves — and that rBGH-tainted milk could increase the risk of cancer — were covered up by big ag, the FDA, and even the media.