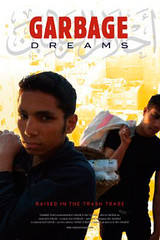 A neighborhood filled with filthy garbage isn’t where most people picture their dream home — but take that garbage away, and the garbage pickers no longer have a livelihood. That painful problem is what you see in "Garbage Dreams," a documentary that follows the lives of three teenage Zabbaleen (literal translation: garbage people), who make their living by picking up Cairo’s trash.

Produced and directed by Egyptian-American filmmaker Mai Iskander, "Garbage Dreams" shows how the Zabbaleen daily collect 6,000 tons of Cairo’s garbage — and eke together an existence by recycling an impressive 80 percent of it. Making a living out of garbage is hard, dangerous and dirty work — the Zabbaleen live in trash-filled neighborhoods and need to get regular tetanus shots — yet when multinational garbage disposal companies are brought in to modernize Cairo’s waste disposal system in 2003, the Zabbaleen are suddenly unable to cobble together a living.

The film follows the Zabbaleen as a group trying to organize, educating the young about the recycling business at a project called The Recycling School, and strategizing to implement a source-separation program at nearby neighborhoods. The film also follows the three teens individually — each tasked with creating a livelihood as new adults in a world that’s quickly changing.

While "Garbage Dreams" certainly shows both the painful economic plight as well as the courageous humanity of the Zabbaleen, the film leaves a lot of questions unanswered. It’s unclear, for example, why the Zabbaleen activists don’t seem to engage more at the government policy level — a task that seems necessary to create large-scale change that might improve their lot.

An attempt to encourage people to separate out food waste from other trash to simplify the Zabbaleen’s work, for example, becomes not a push for a city-supported recycling program, but a painstaking task of activists going door to door, trying to convince each resident to sort her trash. We see the Zabbaleen argue amongst themselves about the superiority of their own work (the foreign companies only recycle 20 percent of their trash, and they don’t pick up trash in front of each resident’s door as the Zabbaleen do) — but we don’t see them take these arguments to decision makers and policy makers that are paying the foreign companies.

Perhaps this disconnect points to the Zabbaleen’s sense of disenfranchisement by, and distrust of, their government. After all, the foreign companies were brought in without the Zabbaleens ever being notified or warned of the pending changes — or given a chance to modernize their work. The task of "Garbage Dreams" in part seems to be to give a voice to people who’ve come to believe they don’t have one.

"Garbage Dreams" will be screened next at the 2009 Rhode Island International Film Festival in early August. Visit the film’s website to find out about future screenings near you.