A farm grows in Malibu

Planning to surf in Malibu this summer? Hang ten at Zuma Beach -- then stop by Vital Zuman Organic Farm for delicious local produce.

Environmentally inclined surfers have a few extra reasons to visit Zuma Beach this year. First of all, Zuma Beach currently has a clean, A+ grade according to environmental nonprofit Heal the Bay's Beach Report Card. Second, Zuma Beach is right next to Vital Zuman Organic Farm and Fig Tree Ranch in Malibu. This organically farmed, 6-acre spot has to be Malibu’s best-kept secret — because while the farm has been around for more than 50 years, the place is still quiet and peaceful — an idyllic eco-paradise of sorts offering figs, wild spinach and sweet potatoes grown right by Zuma Beach.

Believe it or not, you can visit this nearby farm six days a week to buy local and healthy yummies — or to get the stuff free by volunteering for a few hours. Vital Zuman is a public farm, open to visitors, volunteers, shoppers, and even sellers. That’s right —  if you live nearby and have an overabundance of avocados and lemons, take your bounty to Vital Zuman to sell the stuff for a dollar a pound — or trade the produce for other goodies at the store.

For those who want their local farmers market to become a permanent fixture, Vital Zuman’s 6-days-a-week store comes pretty close to fulfilling that wish. Here, you can buy not only Malibu-grown fruits and veggies, but also raw local honey, jams and pickled veggies made from local produce, raw milk from Organic Pastures, locally made balsamic lemonade (apparently a good vodka mixer), local handicrafts, and even used books at very cheap prices!

Vital Zuman is certified naturally grown and is farmed using organic, permaculture principles — and gets all its clean water from its own well. The farm isn’t USDA organic certified — since after all, all the produce grown at the farm is purchased and enjoyed locally by neighbors who are welcome to visit — and work — the farm firsthand.

When I stopped by earlier this week, I got to walk around nibbling on everything from radish blossoms to mustard greens — picked straight from the garden, since I didn’t have to worry about pesticides. Unlike the straight, weedless, artificial-looking crop lines at monoculture farms, Vital Zuman’s land has many different types of produce growing next to each other symbiotically. Some of the edibles weren’t even planted deliberately! “When you’re doing it organically without any pesticides and herbicides, stuff just comes up again,” says farm volunteer Kazimir Klossowski (above, right, with volunteer Reisha Fryzer).

Quite a few volunteers come through the farm, whether for a break from city living, for a chance to get free local produce, or for community service credits, in the case of students. The public farm allows for an “enlightened peasant class,” according to Alan G. Cunningham (above), the sole owner of Vital Zuman since 1995, when he returned to run the farm that has been in his family for more than 50 years.

“We’ve been in operation here for 30 years before Malibu became a city,” says Alan, who is now working with the city of Malibu to make Vital Zuman a city-owned community farm (PDF). “I’ve never considered that this property belongs to me. That’s a really fundamental understanding in terms of growing food is that it doesn’t belong to you. You’re just cooperating with Mother Nature.”

Inspired by Alan and the volunteers, and invigorated by the beach breeze, I returned home with a jar of local raw honey and a Salad Bag (above) — a gigantic pre-packed grab bag of freshly harvested salad-friendly produce that goes for $10. Then I made a salad (below) — complete with lemon-honey dressing!

Want to try some of Vital Zuman’s produce? Stop by the farm’s shop to shop a la carte, or if you live nearby, sign up for Vital Zuman’s CSA Farm Box Program, which gets you an overflowing boxful of local produce (below) for $45 a week. You can also find Vital Zuman at the Malibu and Mar Vista farmers markets — or contact the farm directly to volunteer in exchange for fresh farm produce. 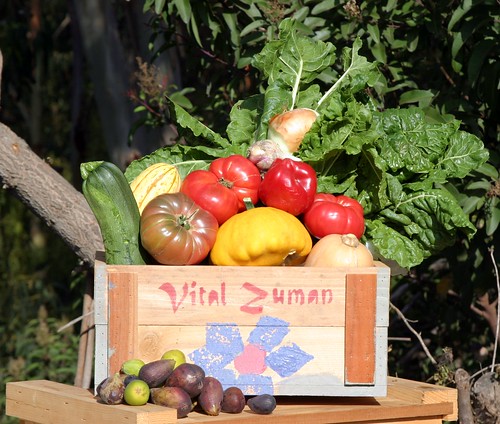 Bottom photo by Vital Zuman; all other photos by Siel