A West Hollywood woman kicks off her 30s with an eco-fashionable project: Turn a vintage dud into a chic outfit every day -- for $1 a day.

365 new dresses for $365 in 365 days. That’s the happiness goal of sorts Marisa Lynch set for herself when, just months before her 30th birthday, she got laid off. Losing a job means hitting the streets with a resume to some, wallowing in grief for others. But for Marisa, it meant getting the sewing machine out and upcycling thrifted fashions. Every day.

“I was just in this not-feeling-good, crummy kind of mood, and I didn’t know how to kick it,” says Marisa. That’s when Marisa saw "Julie & Julia". “[Julie] was finding something to do every day that made her feel great. I was jealous. I thought, I want to find that.”

Thus, New Dress A Day entered the blogosphere. The task: To make a new fashion piece a day — on a budget of a dollar a day — for an entire year.

Think the uber-frugal budget and tight turnaround requirements can only mean shoddy, unfashionable duds? Not for Marisa. All you have to do is take a quick glance at New Dress A Day to see that while this West Hollywood resident may be short on money and time, she’s never short on style. 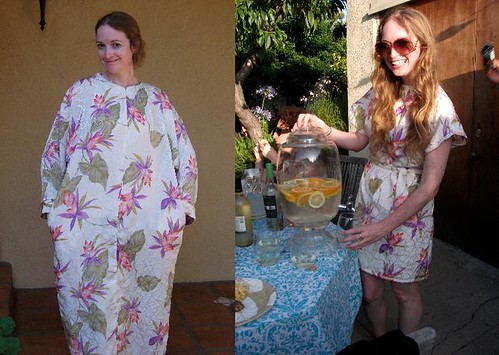 She’s also got an imaginative fashion sense, serious sewing skills, and some awe-inspiring powers of transformation. In each of her daily posts, Marisa shares the story — and impressively fugly before photo — of an old vintage dress found at a thrift shop or garage sale. Then comes the chic and cute after photo — along with details of where she wore the new-again outfit and how it was received. Earlier this month, for example, Marisa took a somewhat frightening-looking blue gown reminiscent of a Disney magician’s suit, and transformed it into a cool blue shirt perfect for her outing to a Dodgers game!

Always a fan of thrift stores, Marisa says she loves the “romanticism of wearing clothes from earlier time.” Marisa grew up seeing her mom — a home economics major in college — sewing things around the home, then learned to sew herself in a home economics class in seventh grade. Though she didn’t sew often, she did carry a DIY purse to her prom, made for just $4 using directions from a Sassy magazine.

Now, Marisa sews every day, under a deadline. The time commitment is considerable. Marisa usually goes thrifting and garage sale-hopping on the weekends — Jet Rag’s $1 Sunday sales and the Melrose Trading Post are among her favorite stops — picking up dresses to overhaul during the next week or so. Once home, each trash-to-treasure transformation takes anywhere between 25 minutes to a couple of hours, depending on the condition of the original garment and the desired design. 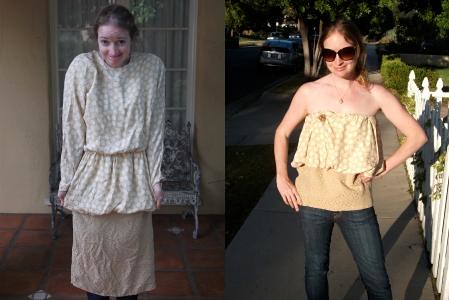 While she sometime gets an immediate idea about what to do with a piece when she first sees it, most designs take more time to evolve. “I’m picking stuff because of the fabrics and because of the patterns — and maybe because of the great hardware or the buttons on the sleeve,” Marisa says.

Marisa’s first post is dated Nov. 27, 2009, but her birthday is actually in mid-October. That day is when she upcycled her first dress for the project — but New Dress a Day didn’t officially launch until about a month later, when Marisa got the mechanics of blogging figured out. Starting Nov. 28 though, the outfit in the post is the outfit Marisa wore that day.

Marisa’s now 194 days into the project, working to juggle thrifting, designing, sewing and blogging alongside her job at a music company and her social life. What happens once the 365 days are up? At the moment, she’s thinking about partnering with a charity or other organization, perhaps auctioning off the 365 creations and donating the proceeds.

But those and other loose ideas have yet to be stitched together into a stylish plan. “I don’t know what I’m going to do,” she says. “But I’m not gonna stop.” Expect Marisa to keep on sewing and blogging at New Dress A Day until Nov. 26, 2010 — and beyond.

Related topics: DIY, Eco-fashion
365 upcycled dresses in 365 days for $365
A West Hollywood woman kicks off her 30s with an eco-fashionable project: Turn a vintage dud into a chic outfit every day -- for $1 a day.