BYO bag for an eco-vacation

IKEA's 'Where has your Blue Bag been?' contest will take one reusable bag fan on a trip for two to Puerto Rico. 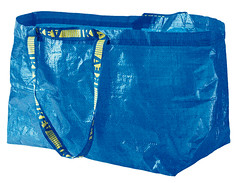 Now your BYO-bagging lifestyle can send you on an eco-vacation! IKEA, which started charging 5 cents per plastic bags back in March 2007 then banned those disposables altogether in October 2008, is celebrating its 59-cent reusable blue bag with a contest that’ll bag one lucky BYO-bagger an eco-friendly vacation for two to Puerto Rico — plus a $100 IKEA gift card.

Enter the Where has your Blue Bag been? contest by submitting a photo, video, or blog post (not a post you’ve written on your site, but one you’re writing on IKEA’s campaign site) “demonstrating your creative or practical Blue Bag uses” by June 7. In addition to the grand prize winner, a runner-up will get a $500 gift certificate to a green spa near them plus a $100 IKEA gift card.

Both of those will be chosen by “an expert panel,” but if you’d rather be judged by the jury of your web peers, try for the “Most Viral” prize (PDF), which’ll get you the same stuff as the runner-up. And if you, like me, don’t even own a blue bag, you can either fake it by using this IKEA-provided image of the bag or enter the general sign-up sweepstakes and hope to be one of the six random winners who’ll each get $100 IKEA gift cards.

More than 6,000 entries have been submitted already! If you enter, feel free to link to your entry in the comments. Maybe fellow MNN readers can help you go viral!

BYO bag for an eco-vacation
Now your BYO-bagging lifestyle can send you on an eco-vacation! IKEA, which started charging 5 cents per plastic bags back in March 2007 then banned those dispo