Sure, Google searches create carbon footprints — but so does everything else. 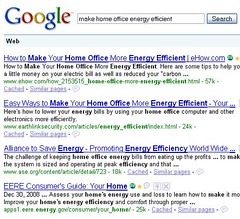 You’ve probably already seen the sensational headlines: “Google threatens polar bears,” “Could Google Searches be Killing Us?,” and the like. A new study about web surfing equated the carbon footprint of two Google searches to that of boiling a cup of water, inciting the blogosphere to — do a lot of Google searches to follow up on the news.

But if you’ve been feeling guilty about your Googling habits, don’t stress anymore. As Alexis Madrigal puts it in Wired Science: “In short, Googling is not the issue, dude.”

Madrigal calculates that Google’s responsible for just 0.2 or 0.006 percent of the U.S. carbon footprint, depending on what numbers you use (Google quickly questioned the original numbers about its own carbon footprint; the scientists who put out the original numbers also specified that their numbers were calculated per second to visit a typical website, not specifically a Google search page. If you want more details on the figures, MNN's tech blogger Karl Burkhart's done some number crunching).

Plus, every human activity creates carbon emissions — and Google helps make some of these activities more efficient. For example, if you drove a few miles to the library to research a topic, your trip alone would far exceed the carbon emissions cost of a simple Google search.

That’s what David Roberts points to in enviro-website Grist. “The emissions of Google searches is a goofy distraction,” Roberts says. “Imagine how much clueless driving around has been eliminated by Google Maps!”

And you can’t forget about the carbon emissions created by the materials in the library either. Jason Kincaid of TechCrunch points out that “a single book runs around 2,500 grams of CO2, or more than 350 times a Google search.”

The bigger message here is to worry not about reducing Google searches, but to think about ways to increasing our energy efficiency — whether it’s by pushing government policies that support renewable energy or by reducing the energy use of your computer by letting it sleep or turning it off when it’s not in use.

Related topics: Energy Efficiency
Google without enviro-guilt
A new study about web surfing equated the carbon footprint of two Google searches to that of boiling a cup of water, inciting the blogosphere to — do a lot of