These eco-conscious bras may not be practical, but could be inspirational.

Since they’re usually worn under clothes, bras may not serve as the best billboard for your eco-message. Nonetheless, the bra’s inspired many inspiring and wacky eco-ideas over the years. Here’s five of them at a glance: 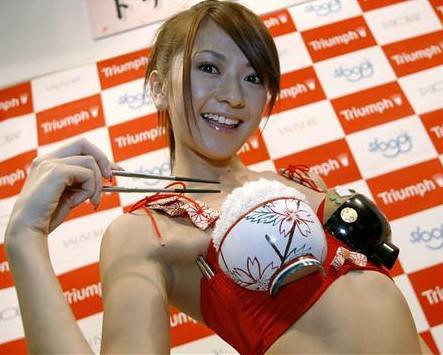 Chopsticks bra. Dubbed My Chopsticks Bra, this concept bra from Japan encourages people to reuse their chopsticks by carrying reusable ones in a Japanese meal-themed bra. Each bra cup each depict a bowl — rice in the right, miso in the left — and collapsible chopsticks tuck into a small pocket on the side. Yum!

BYOBag bra. Conceived by the same company as the chopsticks bra, this recycled-polyester bra — called “No! Shopping Bag Bra” — unfolds into a handy shopping bag. You’ll have to do some tricky maneuvering to actually take advantage of the bra’s multifunctionality though. 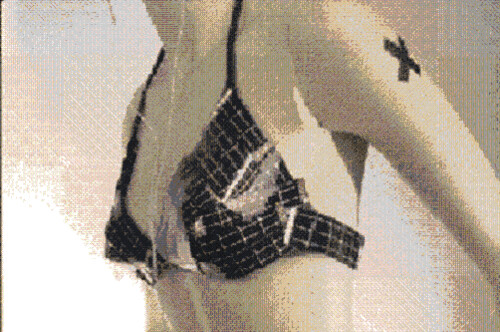 Solar-powered bra. Wanna charge up while laying out at the beach? This iPod-charging, beer-cooling bra also comes with a bottom to complete the electrifying solar bikini set. Part of designer Andrew Schneider’s iDrink swimwear project, this bikini boasts 1″ x 4″ photovoltaic film strips sewn together in series with conductive thread” plus a USB connection. 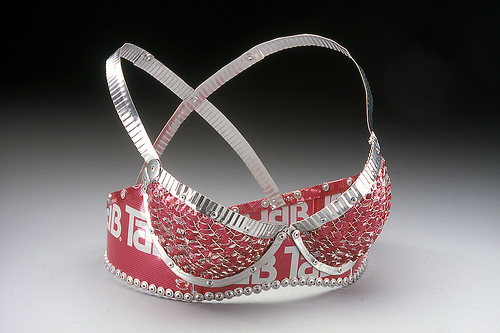 Trashy bra. The toughest-looking eco-bra of the bunch is the Pink Tab Bikini Top, made of upcycled soda tabs, gutter guard, dryer vents, and rivets by artist Ingrid Goldbloom Bloch. Wearable? Probably not, but pretty cool-looking! (via Visible Trash)

DIY plastic bag bra. Ready to make your own smart and strange eco-bra? The BBC’s got detailed instructions on how to upcycle a supermarket plastic bag into a bra. Unfortunately, this bra’s more decorative than functional, though perhaps useful as part of a Halloween getup.

Got other bra-inspired ideas? Share them in the comments --

Related topics: Eco-fashion
Smart and strange eco-bras
These eco-conscious bras may not be practical, but could be inspirational.