Solio H1000 not so powerful

I tried the hybrid solar charger — and found the sleek and techy-looking product highly temperamental. 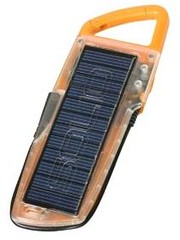 Want to take your iPod off the grid? Read the promises of solar-charging devices, and you’ll be led to believe that solar powering your favorite playlist is a piece of cake. However, I’ve discovered the hard way that not all personal solar chargers are created equal.

What I tried was the Solio H100 (right,) the hybrid solar charger. Unfortunately, the sleek and techy-looking product also proved to be highly temperamental.

Despite the fact that I live in sunny Southern California, I could never get this charger fully juiced up. I always put my Solio on a sunny windowsill but could never get it charged above 60 percent even on a sunny day. This meant I could only partially charge up my iPod (read: less than halfway) — and as most iPodders know, only charging part way tends to compromise the iPod battery’s longetivity.

The other problem I ran into is that my iPod was the ONLY device I could charge via the Solio. The device came with four different nibs (below left), but only one of them was compatible with any of my devices — and by any of my devices, I mean one device — my iPod.

After discovering Solio’s limitations, I looked into what others had to say about this charger — to find that most reviewers agreed with my take: 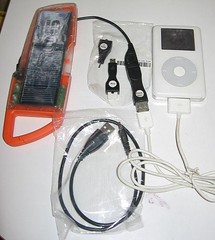 >> Brian Lam of Gizmodo wasn’t impressed: “I verified on two devices that without sunlight of near equatorial directness, this thing doesn’t really charge by solar — at all.”

>> Leif Pettersen at Gadling noted the device won’t charge properly unless put under direct and clear sunlight — meaning it requires “a little babysitting” on the owner’s part.

>> Tony Nunn at Hacked Gadgets found that the difficult-to-fully-charge device a “doesn’t stack up to the modern convenience’s of wall and car chargers.”

>> Dameon Welch-Abemathy of The Gadgets Weblog was left wishing for “better-performing solar panels.”

>> Julie of The Gadgeteer says this device’ll only work properly if you “put it in a place where there are no shadows and where the sun hits it directly” — making “this device more trouble than it is worth” for most people.

>> Even the eco-friendly SmartPlanet points to the Solio H100’s shortcomings: “Not enough gadget adaptors; could be more powerful.”

The lesson here: Read the first-hand reviews of people who’ve tried out the solar charger of your desire before plunking down your hard-earned money for it.

Solio H1000 not so powerful
I tried the hybrid solar charger — and found the sleek and techy-looking product highly temperamental.