How would you like an eco-friendly shower curtain that starts suffocating you if you take too long?

So you want to save water by taking shorter showers — but find your resolve wash away once you start running the water? (”I get such great ideas in there!”) Designer Elisabeth Buecher’s boa constrictor-esque shower curtain could help. (via groovy green) 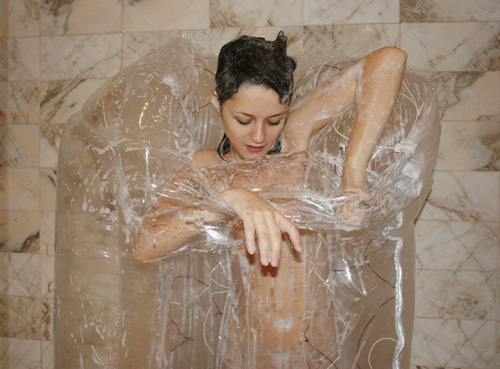 Basically, the shower curtain slowly inflates around you while the shower’s running, in the end trapping and immobilizing the showerer. The idea, I’m guessing, is not so much to kill the un-eco showerer as to speed up said showerer, encouraging them to soap up and rinse off quickly before life is squeezed out of them.

Elisabeth's second idea for a shower curtain slowly grows spikes as you shower — spikes that eventually push you out of the shower water’s reach.

Why such sadistic green gadgets? Elisabeth counters that getting frightened awake by alarm clocks too can be painful — but those clocks are also useful. “I call it ‘design of threat and punishment’ and I use it as an educational tool,” she writes.

Cute idea — Though I do see a serious problem with the design. The goal of these curtains is to ecofy the world — but from what I can tell, these curtains would have to be made with vinyl / PVC — not an eco-product. Until we invent a super flexible material that’s vinyl-like but environmentally sensitive, you’ll have to stick to the shower timer.

Related topics: Green Design, Water Conservation
Take shorter showers or suffocate
How would you like an eco-friendly shower curtain that starts suffocating you if you take too long?