Tony's Darts Away in Burbank serves up good craft Californian beer and wine -- minus the wasteful bottles.

A bar without bottles? It can be done. At Tony’s Darts Away in Burbank, Calif., all of the 30+ craft beers are on draught.

Instead of shipping in bottles of beer from far away — that’ll simply have to be recycled again after a single use — owner Tony Yanow (below center) decided to “deconstruct what a neighborhood pub is in Southern California and go back to what it should be” and buy just from Californian brewers that support his goal for a zero-waste bar.

“Recycling glass is better, but it requires so much energy to recycle glass,” says Tony. “I advocate as little packaging as possible” 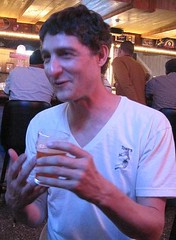 That means no bottles. Okay — there are a few bottles, but only reusable ones. The three Santa Barbara County wines — a fruity gewurztraminer, a summery genache rose, and a great-with-sausages tempranillo created by Curran — are served in cute 1/4 liter bottles (above right; $8 for about a third of a "regular" 750 ml bottle of wine) — or a heftier liter bottle ($32 for about one and a third 750 ml bottles). Those bottles are filled from 15.5-gallon (that would be 6.5 cases of wine) stainless steel kegs (above left)!

The second thing you’ll notice about Tony’s Darts Away: Everything’s from California. Okay — not everything, but almost everything. Tony’s opts for all-Californian produce, using organic whenever possible. The freshly baked sausage buns come from San Marco Bakery down the street, and the meat sausages come from Monte Carlo Deli in Burbank or Saag’s (which offers some natural meat options) in San Francisco.

What’s not Californian? The vegan sausages are made by Field Roast in Washington and Tofurkey in Oregon, and the Daiya vegan cheese is also not local. But that brings me to the third thing you’ll notice about Tony’s: Vegan food takes center stage.

“Vegan is not at the bottom in the corner,” says Tony, pointing at the menu. Tony, who’s almost vegan himself (he eats eggs and honey), points out that while everyone can eat vegan food, not everyone can eat the meatier fare — so it makes sense to highlight the vegan fare first. From four types of vegan sausages to numerous vegan dips to vegan chili, Tony’s really goes out of the way to make pub fare vegan-friendly. You can even get your vegan sausage served on a bed of organic greens!

At the grand opening, guests got a taste of the finger foods. I loved the spicy kick in the Housemade Russet Potato Chips with Cajun Spice (above), but really got addicted to the Pyntch’s Mad Sweet-Potato Fries with maple-chipotle glaze and crushed almonds (below). Both of those, by the way, are served on photodegradable wax paper.

Tony’s Darts Away opened its doors about four weeks ago, but held the official grand opening yesterday. The bar already draws an eclectic crowd. Its restaurant status allows even high school kids in to enjoy cream soda on tap. Vegans come for the good eats, and some locals already stake out their favorite seats at the bar almost every day.

Plus, Foursquare fans already have a competition going for mayor status at this new joint — since the mayor gets a special Foursquare glass that gets him or her 24 ounces of beer for the price of a pint. Above’s Tony’s sommelier, Andy Lynch, models the Foursquare glass.

Which is to say, most people come for the beer, which in my enthusiasm over the bottle-free wines, I forgot to try. Above is the white board in the back that gets constantly updated as kegs get quaffed. Next time I stop by, I’ll take advantage of the $8 tasting flights that let me pick out any four beers from the ever-changing menu — revised and reprinted once or twice a day — on 100 percent post-consumer recycled paper, of course.

Some beers are organic, many are local, all are Californian. Whether you're a Burbank resident or a tourist passing through, stop by Tony's for a zero-waste tasting of the wide variety of craft beers Californian breweries have to offer.