Are you driving away your paycheck?

A new WalkScore-esque website lets you plug in a ZIP code to see the average transportation cost of that neighborhood.

WalkScore — a website that grades neighborhoods on walkability — is beloved by de-car’d environmentalists, traffic-haters, and simple living enthusiasts. But now comes a new website that’ll attract frugalistas and economists,  too. Abogo shows the dollar savings of walkable neighborhoods! (via Switchboard) 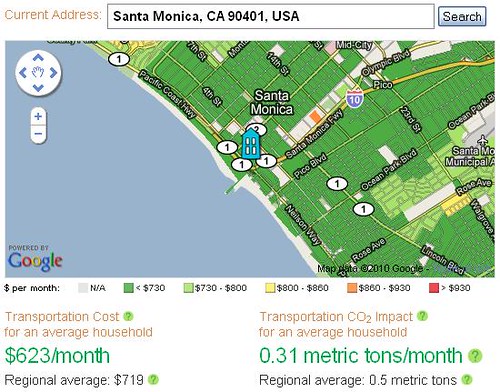 Plug in any ZIP code to find out the average amount of monthly spending per household for transportation in that neighborhood. If you live in walker-friendly Santa Monica or Hollywood, you’ll end up paying a lot less per month to get around than if you live in a neighborhood with cheaper rents but few amenities and bad transit connections. 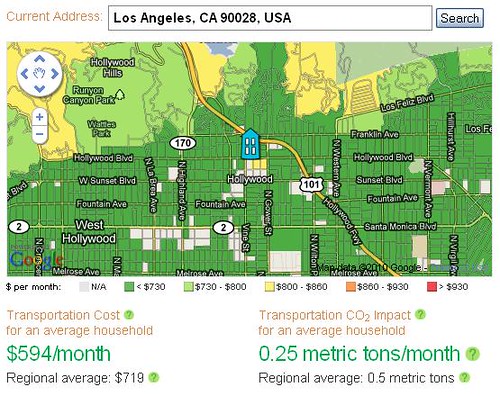 I was surprised to see that Abogo’s transportation costs are so much lower in Hollywood than Santa Monica — until I found out that household income, presumably higher in Santa Monica, gets factored into the equation. I tried to delve deeper into exactly how Abogo did its calculations to see if I could take average household income out of the equation — with the goal being to see if someone on a specific salary would benefit more by living car-lite in Hollywood or Santa Monica — but gave up on this task once I got to this crazy equation (PDF):

Regardless, Abego should at least get visitors to think twice about buying an “affordable” house in, say, Orange, Calif. Affordable doesn’t come cheap if you have to burn fossil fuels whenever you run out of soy milk — or waste four hours a day commuting to your far-off home! 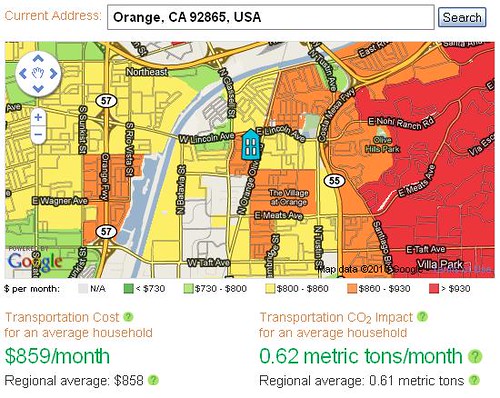 The connections between housing, transportation, money — and most importantly, happiness — is a big theme covered in "Your Money or Your Life," a book I recommend to everyone. But for a quicker, wonkier read, there’s The Affordability Index: A New Tool for Measuring the True Affordability of a Housing Choice (PDF), a 24-page brief put together by the Center for Transit Oriented Development and the Center for Neighborhood Technology.

The basic message? Don’t just look at the cost of rent or the price of a house when deciding whether or not you can afford to live in a place. Factor in transportation costs, and the neighborhoods you consider living in will change altogether — or better yet, get rid of the car, and you'll be able to afford to live in many neighborhoods you once thought were out of your financial reach.

Related topics: Alternative Transportation, Transportation
Are you driving away your paycheck?
A new WalkScore-esque website lets you plug in a zip code to see the average transportation cost of that neighborhood.