I have a tough time getting into Facebook games — which may be a good thing, since I already waste enough time on that social networking site. But for those of you with time to kill, two new eco-minded games just launched on Facebook!

The first: Trash Tycoon, created by Guerillapps for the upcycling-happy people at TerraCycle, basically makes you the neighborhood's cleaner upper. While sweeping along, you learn all about reusing, recycling and upcycling waste — by picking up small treasures like coins thrown out as trash, learning about worm composters, and even crafting sellable items from trash for points and virtual cash.

Best part about this game? I got to design my own cute little avatar. Worst part? Your avatar's assigned to clean up a neighborhood that's so overrun with garbage as to be overwhelming — though to be fair, cleaning in this virtual world is really just clicking. After my avatar got so tired that, even after the five cups of fair trade coffee I bought her, she pooped out again, I gave up and moved on.

New York Times' Penelope Green seems to have lasted a little longer than I did — or at least long enough to purchase a worm farm and paper recycling plant. If you get so into the game that you end up buying Facebook cash to play it, you'll be happy to know that 10 percent of what you spend will go to carbon offset projects — that players can vote on. 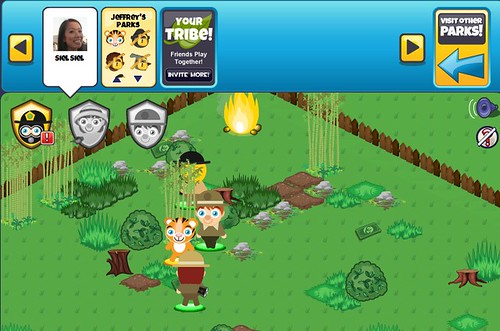 The second: My Conservation Park, created by Good World Games with the Dian Fossey Gorilla Fund, lets you pretend you're running a park, where cute little animals are always under threat from poachers, fires, and other disasters.

Best part of this game? The little mini-games that pop up, which are kind of fun. The first had me tag tigers that popped up from behind foliage, Whac-A-Mole style. Sadly, I discovered I am really horrible at tagging animals — I had to tag 10 tigers within a minute, and the task took me four tries!

Worst part? The constant disasters that broke out in my park got to me — because they were so repetitive. Often, as soon as I caught a poacher or put out a fire or got rid of an animal trap, another poacher or fire or trap appeared on the park, requiring me to click them away before I could go on with the next step. After about the dozenth poacher, I called it quits. If you get into the game, though, and end up exchanging real cash for virtual goodies, you'll be happy to know that 15 percent of what you spend will go to one of five nonprofits, including the Dian Fossey Gorilla Fund, Orangutan Outreach, WildAid, UnitedConservationists or the Sea Shepherd Conservation Society.