Only 24% of Americans have 6 months of savings

The overall economy is improving; the unemployment rate is down, the stock market is up and the housing market is on the upswing. Unfortunately, the state of family economics isn’t as healthy. New survey data from Bankrate.com reveals that only 24 percent of American families have six months of emergency savings and this figure has remained relatively unchanged for the past three years. 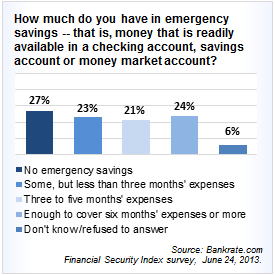 While a six-month emergency fund is a great way to prevent financial disaster in the event of a job loss, having even a small emergency fund can help put a buffer between you and a financial meltdown. Unfortunately, 27 percent of the 1,004 adults surveyed have no emergency fund whatsoever. If the water pump goes out on the car, what are these consumers to do? Pay for the repair with a credit card, go without a vehicle or even worse, seek out a high-interest short-term loan, which puts their overall financial situation on even shakier ground.

Survey data revealed an even more pressing concern – the ever-widening income gap in the United States. Nearly three-fourths (72 percent) of surveyed consumers that make more than $75,000 per year had a three month emergency savings fund while only 35 percent of families that earn less than $75,000 had a three month savings cushion.

Other highlights from the June 2013 Financial Security Index include:

Do you have an emergency fund? If so, do you have three months of savings? Six months? More?
Related on MNN:
Related topics: Economics, Save Money
Only 24% of Americans have 6 months of savings
Bankrate.com survey data reveals that consumer savings rates are stagnant.